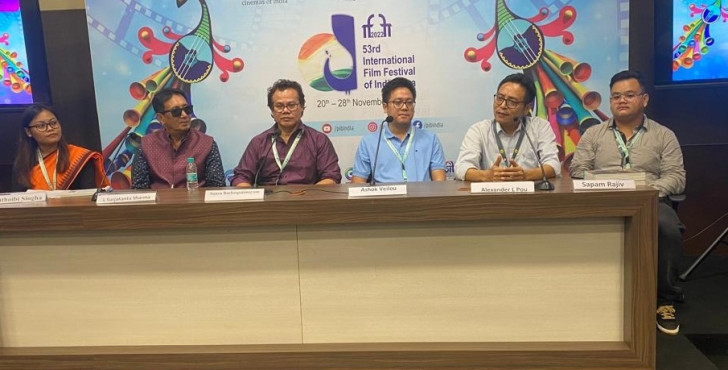 Panaji, Nov 25
Manipuri films projecting the state's culture and way of life have been drawing global attention for the past 50 years, filmmakers and producers from the northeastern state said on Friday.

They made the observation during the ongoing 53rd edition of International Film Festival of India (IFFI) celebrating 50 years of Manipuri cinema.

Deb Kumar Bose directed 'Matambi Manipur' was the first Manipuri film, which was released on April 9, 1972. Since then, April 9 is celebrated as the birth anniversary of Manipuri cinema.

Manipur State Film Development Society (MSFDS) Secretary Sunzu Bachaspatimayum said that the internationally acclaimed Manipuri films such as 'Imagi Ningthem', 'Ishanou', 'Loktak Lairembi' or 'Look at the Sky' are projections of the Manipuri society, culture and way of life.

Expressing his gratitude to Ministry of Information and Broadcasting, National Film Development Corporation and IFFI for duly recognising and honouring the 50-year-old Manipuri Cinema by giving a special section in the 53rd IFFI, the MSFDS Secretary said such recognition would further boost the Manipuri cinema and encourage the new filmmakers and producers.

He noted that Manipur has celebrated the golden jubilee of its cinema one year ahead since April 9, 2021 and the Information and Broadcasting Ministry and Directorate of Film Festivals have financially supported and assisted the yearlong golden jubilee celebration.

Throwing light into the history of Manipuri Cinema, Bachaspatimayum said that Manipur had attempted its first feature as early as 1948 in Hindi language considering the commercial aspect. The attempt failed and over 20 years later in 1971, S.N. Chand took the risky step to make the first Manipuri feature film.

However, another film titled 'Matamgi Manipur', which was produced by a businessman named Karam Monamohan and directed by Bengali filmmaker Deb Kumar Bose was released in 1972 ahead of 'Brojendragee Luhongba', the film by S.N. Chand, the MSFDS Secretary said.

However, Chand is now remembered as the father of Manipuri Cinema as he is the first Manipuri film director. Film Facilitation Officer (Eastern Region) of NFDC Alexander Leo Pou while talking to the media stated, "Our films are the window to our culture, politics, economy and exotic way of life.

He also exuded confidence that writers, producers, directors and those associated with filmmaking of the sensitive state of Manipur will continue to make films that speak beyond the frame.

In all, 11 Manipuri films are being screened under the Special Manipuri Cinema section titled "Golden Jubilee of Manipuri Cinema" in the ongoing 53rd edition of IFF in Goa.