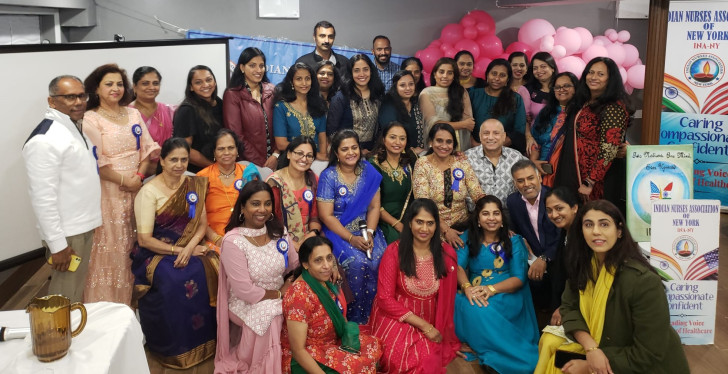 Dilbar Restaurant in Queens, New York hosted the Indian Nurses Association of New York's (INANY) annual general body and National Nurse Practitioners Week celebration this past Saturday. It also provided venue for INANY to demonstrate evidence-based strategies to mitigate or combat surging anti-Asian hate incidents.
The foregoing year's activities were planned and organized after assessing the lingering consequences of the COVID-19 pandemic that impacted in the society at large, said Dr. Anna George, the president of INANY as she addressed the general body. INANY organized experts in mental health to conduct practical training in order to ease various stress related issues affecting healthcare workers, those who suffered from the epidemic, their relatives and the community. INANY also collaborated with New York State Senator Kevin Thomas to serve economically disadvantaged communities through health fair and blood drive. Dr. George said that they have been able to do many services during the year, such as professional continuing education for nurses, financial assistance for nursing students, collaboration with Grand Canyon University for higher education for practicing professional nurses, tuition assistance for poor students, food and clothing collection for the poor, volunteering in food pantry, etc. The goal was to bring in-depth benefits to the Indian community and the society at large – Dr. George, Secretary Jessie James and Treasurer Lyssy Alex proudly emphasized in their reports. They highlighted that the sub-grant they received to provide training to address the incidents of discrimination and hate against Asians is proof that INANY’s community-wide, knowledge-based and service-based activities have become mainstream. An effort is underway for a sub grant from American Nurses Association (ANA) to train nurses to disseminate the Centers for Disease Control's guidelines for infection prevention and to conduct communitywide infection prevention and control trainings - Dr. George revealed.
Advanced Practice Registered Nurse Committee Chair Dr. Jessie Kurian took the helm of the National Nurse Practitioner Week celebrations. Nurse Practitioners from specialties such as neurology, cardiology, gastroenterology, and psychiatry proudly introduced themselves and their practices which reflected the impact of the use of most modern available treatments with compassion inherent in nursing. The number of higher education graduates among Indian nurses is increasing like never before. The number of Indian nurses with doctoral degrees engaged in medical fields, colleges and universities is increasing astonishingly. Although full-time work and the responsibilities of a housewife or homemaker take whole time of the day, it is now common to seek professional higher education, making use of the opportunities uniquely available in the United States. This trend is invaluable in increasing the quality of nursing by enhancing scientific education and reducing the gap in healthcare. INANY’s former president, advisory board member and prominent social activist Mary Phillips congratulated nurse practitioners on Nurse Practitioners' Week by gifting them roses.
In recent years, the discrimination, bias, and other hate incidents against Asians have increased dramatically in the society itself and is tarnishing the very face of the society. Discrimination and hatred against Asians, including Indians, has increased like never before. From March 2020 to March 2022, more than 11500 different types of crimes have been recorded. These range from neglect and bias at work and other environments to physical assaults and murders. With a sub-grant from the Coalition for Asian American Children and Families, the Indian Nurses Association of New York is training community groups to address this disturbing and disgraceful trend. The purpose of the training is for the bystanders to extend a helping hand to those who are subjected to human rights violations and abuse without compromising their own safety. The five methods, knowns as 5Ds are Distract, delegate, document, delay and direct. Many colleges and universities in the US have adopted this training to address hate, bias and harassment in their campuses. Dr. Solymole Kuruvilla, a Director of Occupational Health Services at the NYC Health and Hospitals Corporation and Vice President and Paul D Panakal, a member of INANY Governing Board Member did the presentation called “Bystander Intervention.”
The members nurses present utilized the mealtime to personally know each and other and establish professional networking.
Paul D Panakal
[email protected]
347 330 0783
7320 255th Street
Glen Oaks, NY 11004
Dr. Anna George addresses the General Body
Grace Alexander reports on Awards & Scholarships
Dr. Solymole Kuruvilla & Paul D Panakal presenting Bystander Intervention
Lyssy Alex presents treasurer's report
Dr. Jessy Kurian welcomes Advanced Practice Registered Nurses
Aleyamma Appukuttan presents Fund Raising report