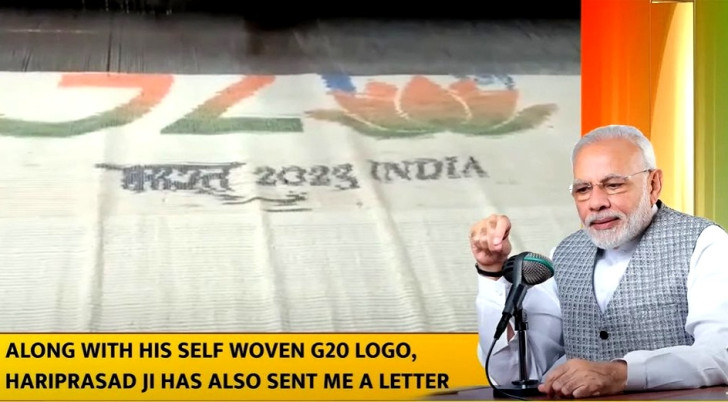 Hyderabad, Nov 27
A weaver from Telangana surprised Prime Minister Narendra Modi with his unique gift -- a hand woven logo of the G20.
The Prime Minister was all praise for the weaver during his monthly radio programme 'Mann Ki Baat'.
Veldi Hariprasad from Rajanna Sircilla district sent the novel gift to the Prime Minister coinciding with India taking over the presidency of G20 and gearing up to host the key summit next year.
"A weaver from Rajanna Sircilla district of Telangana Veldi Hariprasad garu has sent me a self woven G20 logo. I was amazed to see this precious gift," the Prime Minister said.
"Hariprasad Ji has such a mastery over his skills that it attracts everyone," he added.
Modi also mentioned that along with the logo, the weaver from Telangana also sent him a letter. "He says that hosting the G20 summit next year is a matter of immense pride for India. To celebrate this achievement, he has made this logo," the PM said.
He also stated that Hariprasad inherited this talent from his father and "today he is passionately practicing it".
The PM said that many people like Hariprasad sent him letters saying that their hearts have swelled with pride at the country hosting such a big summit. They have appreciated India's proactive efforts regarding G20.
The Prime Minister said that he had the privilege of launching the G20 logo and website of the Presidency of India, and the logo was chosen through a public contest.
He appealed to the people to join G20 in one way or the other. The Indian logo of G20 can be made, printed, in a very cool way, in a stylish way on clothes, he said.