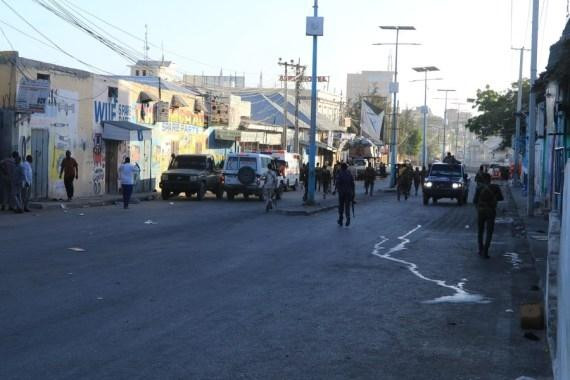 Mogadishu, Nov 28
Al-Shabab terrorists have stormed the heavily fortified Villa Rosa Hotel in Mogadishu, police in the Somalian capital said, adding that there was no immediate information on casualties.
A huge bomb exploded on Sunday at the busy hotel, which is frequently used by government officials, Xinhua news agency quoted the police as saying.
"The forces rescued government officials and members of the public who were trapped in the building," Sadiq Dudishe, spokesperson of the Somali Police Force, told local media without disclosing the number of casualties.
A police operation was underway to end the siege at the hotel, Dudishe added.
Witnesses said the extremist group set off the explosion at the gate of the hotel near the presidential palace.
"The government forces arrived at the scene to rescue the people and are still fighting the militants inside the hotel. We can hear gunshots from the hotel," a resident told Xinhua
Al-Shabab militants, who have been fighting to topple the government for more than a decade, claimed responsibility for the bombing, saying they targeted a gathering of officials at the hotel.
The African Union Transition Mission strongly condemned the attack and expressed solidarity with the government and people of Somalia, saying it "applauds Somali security forces for the swift response to prevent further casualties and property damage".
In August, three months after taking office, President Hassan Sheikh Mohamud pledged "total war" against the Islamist militants following an attack on another popular Mogadishu hotel in which more than 20 people died.
Two months later, twin car bomb explosions near a busy junction in Mogadishu killed at least 100 people.
Al-Shabab claimed responsibility for that attack also.