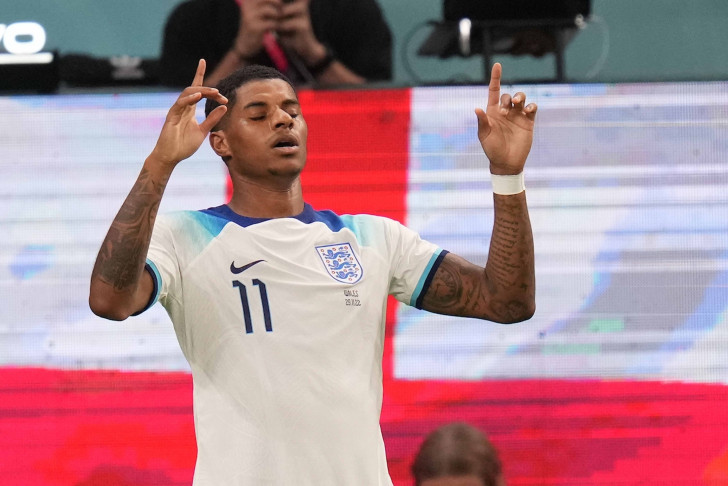 Doha (Qatar), Nov 30
A brace from Marcus Rashford and a goal from Phil Foden helped England to trounce Wales 3-0 in the FIFA World Cup and qualify to the knockout stage as group leaders.

On Tuesday night at Ahmad Bin Ali Stadium after a barren first half, the English strikers went on a goal scoring spree notching three goals within a span of 18 minutes.

Manchester United striker Rashford started the scoring in the 50th and added his second one in the 68th minute, in between Manchester city's Foden scored in the 51st minute.

England topped the group after a 3-0 win over Wales and will take on African Cup Champions Senegal, the Group A runners up in the knockout stage on Sunday.

England and USA from Group B join Senegal and The Netherlands, the two teams which made it to the last 16 stage from Group A. Other teams which have qualified for the knockouts till date are Brazil, Portugal and France, all the three having made it to the next stage with a game to spare as they have won two of the three group matches.

The US, returning to the World Cup for the first time in eight years, finished with five points with one win and two draws from Group B and sailed into the knockouts as group runners up and will face The Netherlands, the winners of Group A. The USA had two draws, 1-1 with Wales and 0-0 against England.

Iran, who were thrashed 6-2 by England but recovered to beat Wales 2-0, finished with three points, for the 2-0 win over Wales, who were returning to the World cup after a 64 years' absence, lost all their league matches.

After a sedate first half, the game sprung to life thanks to the three goals from England.

The Three Lions opened the scoring with a magnificent strike from the England forward. Rashford took a couple of steps and whipped a shot over the wall and past the diving Danny Ward in Wales goal for his second goal of the tournament and his first direct free-kick goal for England at the 2022 World Cup.

A minute later, Foden delivered on the goal scoring front of a move fashioned by Rashford and Harry Kane, the former won the highball and the latter strokes a low cross across the face of goal that Foden can't miss, 2-0.

For the Manchester City striker, it was his first for England in 16 appearances and his first in over two years in an England shirt. The 21-year-old also silenced a few of his critics in the process.

Rashford added a personal second and the team's third. The move started deep from the England defense and Kalvin Phillips launched the ball forward with precision to the Manchester United forward. Rashford did not disappoint as he carried forward the ball and in a swift action moving inside and finishing off with a low shot.

Rashford's second goal was England's 100th scored at the World Cup, while it made him just the second Manchester United player to score 3+ goals for the Three Lions at a major tournament after Bobby Charlton. "In the first half we controlled the game but we didn't create enough clear chances. We wanted a bit more thrust in the final third, to play forward a bit quicker. The second half, once we got the two goals, we knew that their spirit had probably gone. I thought we kept our discipline right until the end," England coach Gareth Southgate said after the match.

The England tactician praised both the goal scorers for their efforts.

"It's great for (Marcus Rashford). He's trained really well, I have to say, and he could have had a hat-trick. His free-kick was an incredible strike; that's what he's capable of. In moments I thought both [Rashford and Foden] were a bit quiet in the first half. We decided to switch them at half-time and they responded really well, and for them to both get their goals was great."

Rashford on the other hand said they were disappointed by the draw against USA and were determined to get full points.

"It's a great feeling. We were a bit disappointed after the USA game, and the only way to bounce back is to have a good performance in your next game; I thought we did it. It was just about taking the chances when they came," said Rashford.

The striker was happy that he was successful with his freekick.

"I fancied a free-kick in the first half, but the one in the second half was in a better position. From there it's about being calm and executing what you do in training. They don't go in often but I was glad it did today.

"At half-time the manager said we'd played really but that we could work the keeper more. In the second half we did that. Moments like this, this is what I play football for. I'm really happy that we're going through and I hope we can build on this performance. I have massive ambition for this team and I think we play even better," he added.