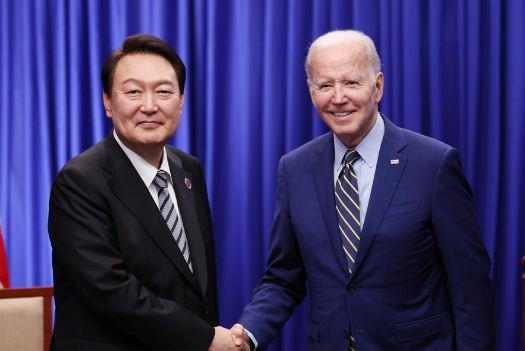 Seoul, Nov 30
South Korean President Yoon Suk-yeol and US President Joe Biden will co-host the second Summit for Democracy from March 29-30, 2023, to discuss building more resilient democracies around the world, Yoon's office said on Wednesday.
The co-hosts of the virtual event will also include three more representatives of each continent -- the Netherlands (Europe), Zambia (Africa) and Costa Rica (Latin America) -- Yoon's office was quoted as saying by Yonhap news agency.
The presidential office said the upcoming summit is expected to offer an opportunity to continuously expand the nation's horizon of value diplomacy by sharing its democratisation experience and anti-corruption efforts with the international community.
The event will come after the first Summit for Democracy held in December 2021 to discuss strengthening democracy worldwide, combating corruption and defending human rights. Leaders of about 110 countries took part in the first summit and announced about 750 commitments.
According to a joint statement released by the five countries, the second Summit for Democracy will "demonstrate how democracies deliver for their citizens and are best equipped to address the world's most pressing challenges."
"From wars of aggression to changes in climate, societal mistrust and technological transformation, it could not be clearer that all around the world, democracy needs champions at all levels," the statement said.
It also said they look forward to demonstrating how transparent and accountable governance remains the best way to deliver lasting prosperity, peace, and justice.
The second Summit for Democracy will assemble world leaders in a virtual, plenary format on March 29, followed by regional hybrid gatherings to be joined by representatives from government, civil society and the private sector.
South Korea is to preside over an Indo-Pacific regional meeting on the theme of anti-corruption, it said.