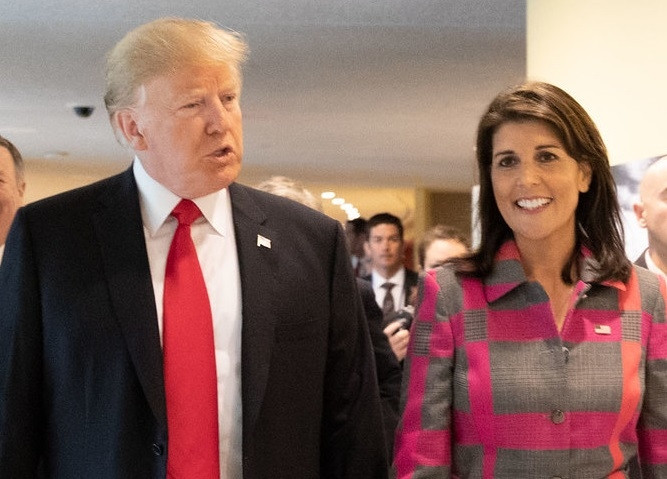 Washington, Jan 21
Nikki Haley, the Indian American Republican who is eyeing a bid for the White House in 2024, has been accused of plotting to become former President Donald Trump's vice-president.
Former Secretary of State Mike Pompeo, who made this accusation in his memoir, goes on to claim in the book that Haley's co-conspirators were former President Trump's daughter Ivanka Trump and her husband Jared Kushner, who both held senior position in the White House at the time.
Haley dismissed the charge as a stunt to sell the memoir.
Pompeo does not specify if Haley was supposed to replace Mike Pence as vice-president in this plot or join Trump as running mate in his 2020 re-election bid.
If the move was for Haley to replace Pence, it would have been her and not Vice-President Kamala Harris who would have gone down in history with a clutch of firsts - the first person of colour to rise so high in the US government, and the first Asian American and the first Indian American.
She would have made history as Trump's running mate as well - but jointly with Harris.
Neither situation happened.
Pompeo is himself considering a 2024 White House bid and takes swipes at others in the Republican party who he could face in the primaries, with the exception of his former boss Trump, who has already announced his intention to run a third time, and former Vice-President Pence, who is also mulling a run.
Pompeo's account of Haley's plot is not firsthand. He cites Mark Kelly, then chief of staff to the president, who felt "played" as the alleged move came at a meeting he cleared for Haley with Trump. Haley, it turned out, was not alone, but was joined by the president's daughter and son-in-law.
"As best Kelly could tell," Pompeo writes in his memoir, "they were presenting a possible 'Haley for vice-president' option. I can't confirm this, but [Kelly] was certain he had been played, and he was not happy about it. Clearly, this visit did not reflect a team effort but undermined our work for America."
The book is slated for release on January 24. This so-called plot was reported by The Guardian, which had early access to the book.
Pompeo sounds uncertain of his claims here.
And Haley hit it out the park predictably, calling the charge "lies and gossip to sell a book".
Haley was US ambassador to the UN at the time and a rising start in the Republican party on reputation made and burnished as two-term governor of South Carolina, one of America's most conservative states.
As ambassador to the UN, Haley was accorded a federal cabinet position and could often call and meet Trump without going through the state department protocol.
Then she resigned unexpectedly in 2018, with two more years left of Trump's term. And she wasn't very convincing about her reasons. "There's no personal reason," she had said, appearing with Trump at a joint news conference. "It's very important for government officials to understand when it's time to step aside."
And then, without being prompted, she said, "No, I am not running for 2020."
True to her word, she did not not run in 2020.
But shortly after Trump lost the 2020 re-election bid, Haley signalled her intentions in an interview to a US media outlet, saying it was time for the Republican party to move on.