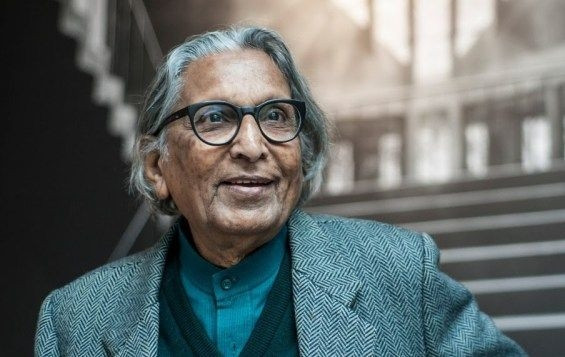 Ahmedabad, Jan 25
Balakrishna Vithaldas Doshi, who was the first Indian to bag the Pritzker Prize, considered architecture's highest honour, has passed away leaving behind irreplaceable void in architecture industry.
Born on August 26, 1927 in Pune, Doshi, who right from childhood was interested in arts, got admission in the Sir J J School of Arts in Mumbai. Later, he came in contact with France's leading architect Le Corbusier, who played a very important role in carving, channelising and exploring Doshi's skill right in India.
Le Corbusier assigned him to direct the planning and architecture work of Sarabhai Vila, Sodhan Villa, Ahmedabad Textile Industries Research Association building.
Doshi's architecture is seen in some of the most iconic buildings in India, including the Indian Institutes of Management in Bengaluru and Udaipur, the National Institute of Fashion Technology in Delhi, along with the Amdavad ni Gufa underground gallery , the Centre for Environmental Planning and Technology, the Tagore Memorial Hall, Institute of Indology and Premabhai Hall, and the private residence Kamala House - all in Ahmedabad.
The Padma Bhusan awardee had also received the RIBA Gold medal.
Remembering Doshi's service in conceptualising institutes, Utpal Sharma, director Nirma University, Ahmedabad said, "Doshi had supported the Lalbhai family in setting School of Architecture (Formerly Centre for Environment Planning and Technology) 1962, he had also headed School Planning.
Sharma shared his rich experience with Doshi and said: "He guided me to set up the Faculty of Architecture and Planning at Nirma University."
Doshi breathed his last on Tuesday morning and was cremated in Ahmedabad later in the day.