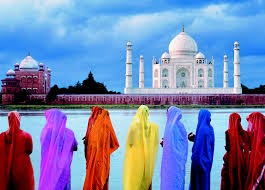 Throw caution to the wind! Casting aside their doubts about safety and all the nuances of planning a holiday, more and more Indian women are now choosing to travel alone.

The reason for going solo: the freedom to explore a new destination at one's own pace and re-discover oneself in the face of new experiences and even challenging situations.

Gurgaon-based Smriti Shankar, for example, globe trots on her own and puts it all up in a blog (Travelling Boots) that inspires others to take up the same. "Travelling alone and surviving the odds has built my confidence and made me focus on the things that I can do. My attitude has changed from being constantly cautious to saying 'let's give it a try'," Shankar told IANS.

Married to a Merchant Navy officer, Shankar's passion took flight when she joined him on the ship and would dock at different ports, offering opportunities to explore a new place. "The moment I could access the internet, I would read up about the place and go exploring on my own using the public transport. Each time I would come back with amazing stories, and although there were traumatic experiences as well, they soon turned into funny stories after a while."

Safety, of course, is the topmost priority for solo women travellers and they do their homework well before setting out to a particular destination.

"For women, travelling with a male partner, or in a group, ensures safety, and safety is a priority for any traveller. That being taken care of, one would feel much more confident in taking a journey alone," says Arushi Kher, a Mumbai-based student who takes at least two trips a year by herself.

"When I am planning a trip, for example, I research the place well. Every place has its dodgy corners and the best way to know about it is interact with someone who either hails from that place or has travelled there before," Kher told IANS. "It's good to be cautious, but don't be so scared that you forget to enjoy the experience!"

Shankar swears by airbnb.com, an online forum for travellers on accommodation - mostly home stays and apartments instead of hotels - across the world. "And as far as being cautious goes, sometimes it's good to let go. In Boston for example, I had a long conversation with a man I was trying to avoid in a coffee shop, discussing world politics to (Prime Minister) Narendra Modi!"

"We don't usually talk to strangers when in a group or as a couple, although this is the best way to open our minds. This is what is so great about travelling alone; it's liberating," Shankar said.

Piya Bose, who traded her career as a successful corporate lawyer to start Girls On the Go (GOG), a women-only travel club in 2008, feels that it is a misconception that Indian women are not into travelling as much as their Western counterparts, although it may seem so.

"I have always enjoyed travelling alone and have been doing so since I was 16 when I went to South America. There I noticed that while there were foreigners travelling alone, there weren't as many Indian women doing so," Bose recalled while speaking to IANS.

At 25, Bose ditched her career as a lawyer and started GOG, building on the belief that Indian women wanted to travel, but for the lack of company and probably confidence did not dare do so alone. In her own words, the response it generated gradually was phenomenal - and girls as young as 16 to women as old as 80 were signing up to fulfil their dream of travelling.

Since they are doing everything on their own, solo women travellers also manage their finances by themselves. Shankar, who quit her full-time job recently to focus more on her travelling and writing, said that she calculates all possible expenses for a trip and starts a 'Debt Diet' - whereby she foregoes a purchase for "a couple of nights in Venice" or "a few meals elsewhere".

"The best part about travelling on your own is discovering yourself," said Rakhi Baruah, a writer and mother of a seven-year-old whose first solo trip was to Pondicherry - a trip initially planned with her husband and friends, all of whom backed out.

"I did miss the familiar, but the thrill of interacting with strangers, of being able to spend as much time at a certain place or in doing something, or nothing, surprised me. It helped me introspect and was a huge boost to my confidence. I do holiday with my son and my husband, but once a year I take off on my own...it's a treat to myself," Baruah told IANS.

"There are two myths I would like to bust," Shankar said. "One is 'you get bored alone'. No, you don't because you are always planning what to do next, and are careful not to repeat mistakes. And second, 'don't talk to strangers'. I have made some lovely friends in coffee shops, bus stops, even befriending a protective waitress at Hard Rock cafe. The important thing is to trust your instinct and walk away if uncomfortable."

(Azera Rahman can be contacted at [email protected])