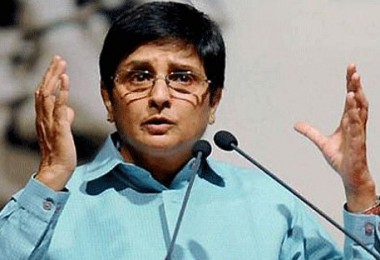 "Yes, she has sent a notice to Kejriwal. He has been asked to ensure that the posters are removed," Bharatiya Janata Party's (BJP) media convener Praveen Shankar Kapoor told IANS.

The Aam Aadmi Party (AAP) has recently put up posters on numerous auto-rickshaws plying in the national capital, asking the people of Delhi to choose between Kejriwal and Bedi for the post of chief minister.

In the posters, the picture of Kejriwal has the word "imandar" (honest) printed below it while that of Bedi has "avsarvadi" (opportunist).

Earlier, fellow party leader Jagdish Mukhi, too, had sent a notice to Kejriwal for using his photograph in similar posters, before the BJP declared Bedi as their chief ministerial candidate.

The AAP pitted Kejriwal against Mukhi, even though the BJP had said that they would contest the Delhi election under Prime Minister Narendra Modi without naming a CM candidate -- the BJP, however, later named Bedi for the post after she joined the party earlier this month.