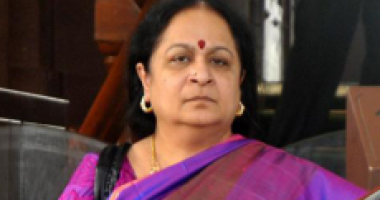 A fourth generation Congress worker, Jayanthi Natarajan, who quit the party Friday, was a former environment minister in the erstwhile United Progressive Alliance (UPA) government and had long served the party as its national spokesperson.

Seen as part of Congress president Sonia Gandhi's coterie, she was privy to several key decisions made by the party top brass before being put out in the public domain.

Grand-daughter of former Tamil Nadu chief minister M. Bakthavatsalam, Natarajan hails from a family of Congress veterans who were associated with the Indian National Congress since its inception in 1885.

Her great-grandfather was a member of India's Constituent Assembly.

Born in 1954, Natarajan did her schooling from Sacred Heart Matriculation Higher Secondary School in Chennai and studied law to pursue a career.

A Chennai-based lawyer, Natarajan entered politics as a Youth Congress worker in the 1980s. She was later noticed by the then Congress president Rajiv Gandhi, who placed her in the Rajya Sabha for the first time in 1986.

In a brief spell away from the Congress, Natrajan joined the Tamil Maanila Congress floated by late Congress veteran G.K. Moopanar in 1996 over differences with then Prime Minister P.V. Narasimha Rao.

She resigned from the Rajya Sabha and was re-elected in 1997 as a Tamil Maanila Congress member.

After the Tamil Maanila Congress allied with the Dravida Munnetra Kazhagam in Tamil Nadu and joined the United Front Government at the centre, Natarajan served in the then I.K. Gujral cabinet in 1997 as minister of state for coal, civil aviation and parliamentary affairs.

Subsequent to the Tamil Maanila Congress' merger with the Congress following Moopanar's death in 2002, Natarajan was appointed the party's national spokesperson.

She succeeded Jairam Ramesh and served in the UPA II as minister of state for environment and forests (independent charge) for four months before she put in her papers in December 2013.

Natarajan later alleged that she was asked by party president Sonia Gandhi to resign from her post and work for the organisation to focus on party work in the run up to the 2014 general election.

Dealing a blow to the Congress, Natarajan Friday quit the party, saying she was shunted despite her diligence in toeing the "party line" and acting on "specific inputs" from Congress vice president Rahul Gandhi's office during her tenure as the environment minister.