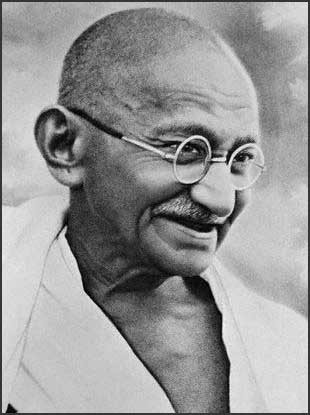 We remember Mahatma Gandhi only on October 2 and January 30. The symbolic spinning of the charkha, recital of bhajans and selling khadi at a discount are the only activities that remind us of him.

For the rest of the year, Gandhi remains a forgotten Mahatma, deified like one of our numerous gods and his teachings reduced to mundane rituals.

Long back, Albert Einstein had said that the coming generation would scarcely believe that a man like him had ever walked the planet earth. Einstein was probably thinking of the very distant future when people might raise their eyebrows in sheer disbelief and ask: "Was there a man like Gandhi in flesh and blood??

Less than 70 years after his death, Gandhi, who preached the gospel of truth and non-violence all his life and strove to liberate India, has become, in his own country and among his own people, a legend and a myth. What Gandhi said or did is mostly forgotten and we are stuck up with symbols like the charkha and khadi.

Khan Abdul Ghaffar Khan, known as the "Frontier Gandhi" caustically remarked when he visited India in 1969 on the occasion of Gandhi's birth centenary celebrations: "I have come to remind the people of India that they have forgotten the Mahatma."

Horace Alexender rightly asked us to bring Gandhi "down to earth again as a living man among his men, which is what he wanted to be", to strip him of his mahatmaship and look at him, if we can, as plain Mr. Gandhi."

Unlike most leaders anywhere in the world, Gandhi knew how to risk his popularity. Ram Manohar Lohia wrote about Gandhi: "He had a calf, the child of a sacred cow, injected to death in a certain situation; he had a monkey shot, he took Harijans into temples, he refused to attend weddings unless they were inter-caste; he sanctioned divorce, he had a large sum of Rs.55 crore and more given to Pakistan at a time when Hindus held that treasonable; he acted and not alone spoke against property; in brief, he hardly ever missed doing anything that brought danger and calumny to him."

The reason why we, as a nation are still struggling hopelessly is that we have shown more interest in aping the West and adopting Western growth models. The result inevitably is that while we have created "islands of prosperity", the masses continue to exist in vast areas of darkness.

Hypocrisy has become our new religion and falsehood our way of life. We have fatal doses of these in all spheres of our life. Fat pundits stooge on gullible masses; pseudo-leftists and chauvinistic scoundrels run the circus that is our politics. Public and private monopolies sustain the "functioning anarchy" that is our economy. Gandhi had warned us of an ennui that will have overtaken us but we never bothered to create conditions in which life will have some mission and purpose. Little wonder we are overwhelmed by rank passivity and continue to wait for a messiah for our deliverance.

The relevance of Gandhi is now being realized the world over as mankind grapples with one vast problem after another. The schizophrenic despair resulting from obesity in affluent societies and the pangs of chill penury in the underdeveloped countries calls for fresh thinking on Gandhian lines.

The poor countries of the world particularly cannot do without Gandhi, who lit the torch of freedom in the hearts of millions of people all over the world. His understanding of socio-economic problems and his deep insight into human psychology were aimed at liberating the downtrodden from their difficulties.

He made a valuable contribution to politics by his practical application of the non-violent weapons of satyagraha, fasts and strikes, demonstrating how vulnerable modern states which depend on the 'Big Lie' are.

It is a pity that the scope of non-violent movements or peaceful resistance against totalitarian or fascist regimes has not been enlarged. In fact, there has been no fresh thinking on these subjects, although there has been a large-scale proliferation of Gandhian institutes.

Unfortunately an impression has gained ground that the real prestige of a nation is measured not in terms of the wellbeing and prosperity of the people but in relation to the armed might of the state. This is a fallacious argument which needs to be countered. Unless the people of a nation are healthy in mind and body, any amount of stockpiling of arms will not boost its image.

(Brij Khandelwal can be contacted at [email protected])

A nearly six-centuries-old song written by Gujarat's most revered poet-philosopher Narsinh Mehta and made by Mahatma Gandhi as his life's guiding force is now a subject of an upcoming documentary.

The documentary titled "Gandhi's Song", being written and directed by Chicago-based journalist and writer Mayank Chhaya, begins production in the next couple of weeks with location shooting in Junagadh and elsewhere in Gujarat where Mehta spent his life creating some of the most popular metaphysical ruminations addressed to Krishna.

"Generations of Indians since Gandhi's assassination on this day sixty seven years ago have grown up thinking that 'Vaishnav Jan To' was written by him. This is a remarkable example of the creation being more enduring than the creator. This particular bhajan is unique in the sense that it remains so current in its moral underpinnings about what constitutes a civilized human being," Chhaya told IANS.

"Gandhi's Song" will be a full-length documentary feature with a clear focus on bringing Mehta and his profound philosophy about the universe to the attention of global audiences. Mehta, who by most widely accepted consensus lived between 1414 and 1481, was in a sense unwitting figure in India's great Bhakti Movement, which flourished organically throughout the country during medieval times between 800 and 1700 CE.
In the tradition of the figures of the Bhakti Movement of the time, Mehta was also a pioneering social reformer who used the power of his poetry to break down rigid caste and class barriers.

"Vaishnav Jan To, which is easily among the most widely sung songs in the world, was typical of Mehta's deceptively simple but profound worldview. Each verse essentially defines what kind of moral standards should drive humans. I would argue that the bhajan in many ways shaped Gandhi's larger socio-cultural view that was at the heart of the country's freedom movement. It is any poet's envy that a creation not only lasts centuries but continues to retain its modernity," Chhaya says.

Although "Gandhi's Song" is pegged on "Vaishnav Jan To" because of its global recognition, the documentary will dwell on Mehta as a poet, reformer and figure who defied constricting social norms and worked all his life to establish societal equity among people divided by castes.

"When Prime Minister Narendra Modi was feted at the Maidson Square Garden, violin maestro L. Subramaniam and his singer wife performed a re-composed version of 'Vaishnav Jan To'. No one mentioned that it was written by Narsinh Mehta. I want to correct that huge omission although knowing his philosophy it wouldn't have mattered to Mehta one bit," Chhaya says.