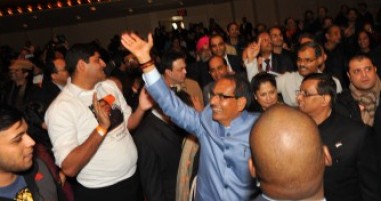 New York, Feb 2
"Ghar aye pardesi", come home diaspora, Chief Minister Shivraj Singh Chouhan said Sunday as he launched an ambitious "Friends of Madhya Pradesh" program here with a call to them and Americans to pour their talents, investments and philanthropy into his state's development.

He marked the launch by joining four US members of Congress and other VIPs in placing their hands on a globe which lit up on the stage a projection of the portal site for the program, friendsofmp.com. The program aims to create a pool of talent and of those interested in helping the state, he said.

The event, modeled after Prime Minister Narendra Modi's reception here last September, featured dance programs, films about the state's economic development programs and the Ujjain Kumbh Mela and a procession of drums and banners leading the VIPs into the Avery Fisher Hall. About 3,000 people filled the venue, which is the home of the New York Philharmonic Orchestra at the Lincoln Center.

Chouhan, the three US Congresswomen, Nita Lowey, Caroline Maloney and Yvette Clarke, and Consul General Dnyaneshwar Mulay spoke of the ties between the US and India boosted by the visits of Modi to the US and President Barack Obama to India and how they could mutually benefit the two democracies.

Calling out to investors and friends of MP, Chouhan said his state follows a "Single Door" policy that goes beyond the Single Window programs for investors, and asked the audience to reciprocate to the open door by "opening your hearts and coming to Madhya Pradesh". The diaspora has made significant contributions to the US, especially in health care, the Silicon Valley and job creation, he said, and now was the time for them to turn to developing India.

"Policy paralysis is over," he said, and with Modi's leadership the world's view of India has changed and the nation was on its way becoming the fastest growing economy in the world. (The World Bank has projected India's growth rate at 7 percent in 2017, making it the highest growth rate for a large economy that year).

He said the old stereotypes were demolished and MP had become a dynamic state on a trajectory of rapid development. The state was no longer "bimari", or sick, he said playing on the acronym, BIMARU, used for states trailing in development. Nor was it any more the state portrayed as the home of notorious bandits of the Chambal valley, he said.

He pointed to the MP's development figures: The state recorded the highest rate of economic growth in the country at 11.8 percent compared to 4.7 percent for India in the last fiscal year and MP's agricultural growth rate was 24 percent.

The state was peaceful and maintained law and order and one of his achievements was turning the citizen's charter into a law, The Public Service Guarantee Act, which made the government responsive to the people and personally penalised officials for bureaucratic delays, he said.

Modi's call is "Make in India," he said, "and my request is 'Make it in Madhya Pradesh'." Modi speaks of a Digital India, and, he said, Madhya Pradesh ready with an electronics cluster and facilities to set up semiconductor manufacturing.

The state has taken several measures, Chouhan said, to make it easy for investors to start enterprises in the state and rapidly begin production:

It has has ready availability of land from a land bank he has created, 24 X 7 power availability, plentiful water, rule of law, industrial peace with no loss of mandays due to strikes, skilled workforce from the upgraded technical institutes and engineering colleges, and the "single door" policy to clear projects.

But he said development will not work unless it reaches the common man and, therefore, he has instituted programs like free health care and food subsidies. He added that economic opportunities were essential for uplifting those living below the poverty line.

With three US Congresswomen on dais, Industry Minister Yasodhara Raje Scindia spoke of the state's mission to improve the lives of girls through the Ladli Lakshmi project for women's empowerment. The project sets up a recurring bank deposit for girls so that they build an asset, and provides books and scholarships, assistance for weddings and even a bicycle when a girl reaches high school.

Mulay, who is working to organise forums for states to tap into the resources of the world's financial capital, New York, said that Chouhan's initiative is a step toward developing the relations between the US and India.

With Maloney and Congressman Eliot Engel, who was also at event, Lowey said, "We will work in Congress to strengthen relations between the US and India." As a member of the House State and Foreign Operations Appropriations Subcommittee, Lowey said she will endeavour to make relations with India a top priority and will be visiting India soon with a Congressional delegation.

Maloney, who has sponsored a bill in Congress for the Postal Service to issue a stamp honoring Diwali, asked the audience to request their legislators to support her bill.

India and the US shared the goal of protecting and promoting democracy, she said. "When India succeeds, America succeeds."

As the daughter of immigrants, Clarke said she knew of the attachment to their native countries that people cherished and how that can help bind the two countries.

Nori Dattatreyudu, a noted New York-based cancer specialist and a Padma Bhushan awardee, said that the diaspora can also help India by sharing their expertise and through philanthropy. He said that he was working with a cancer center in Indore to train specialists and develop treatment facilities. He spoke of a cancer hospital he had started in Hyderabad, which has become one of the top-rated cancer treatment centers and said Indians can help start such institutions.

(Arul Louis can be contacted at [email protected])