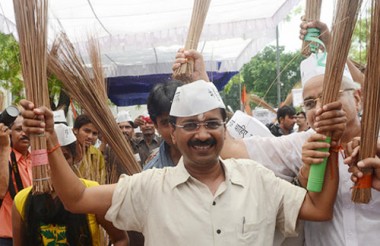 New Delhi, Feb 3
With three days left for the Delhi assembly elections, the TG-CICERO opinion poll projected the Aam Aadmi Party (AAP) getting the highest number of seats (between 38- 46 seats) and the BJP between 19-25 seats in the 70-member house.

The Delhi elections are on Feb 7 and results would be out on Feb 10.

The BJP Tuesday asked AAP leader Arvind Kejriwal to explain why despite being a former Income Tax officer, he could not ascertain the standard method used for round tripping of black money as donation to his party and was it a recompense for some favours.

Releasing the sixth set of questions as part of the BJP's plan to put five questions before the Aam Aadmi Party (AAP) leader everyday till Feb 5 ahead of Feb 7 polls, leader Nirmala Sitharaman asked Kejriwal whether the acceptance of black money as donations was a case of quid pro quo.

"Despite being from Income Tax service, how could Kejriwal not find out the standard method for round tripping of black money especially since he himself was part of political affairs committee which approved them," Sitharaman asked.

"Or was this a case of a quid pro quo" added the Bharatiya Janata Party (BJP) spokesperson.

She then asked Kejriwal to divulge the details about his party's relationship with an industrial house allegedly involved in the coal scam.

"Was not Rahul Mehra, a prominent member of AAP, a paid director on the board of this industrial house during the period in which coal scam took place?" asked Sitharaman questioning Kejriwal's silence on the matter.

In its third question, the BJP asked why the AAP chief tried to deceive the voters of Delhi by citing a fraudulent survey that corruption had come down during his 49-day rule.

"The claim was completely fraudulent and the survey agency, Transparency International had to officially deny this," said the BJP leader.

Claiming that AAP's Yogendra Yadav was part of the UPA government's National Advisory Council and that Kejriwal too attended its meetings, Sitharaman asked him to explain his relationship with the Congress.

Finally, the BJP asked Kerjriwal why he persistently ran the propaganda of engaging with people in participatory democracy when fact is that as CM, his first 'Janta Durbar' ended in chaos and was never held again.

Delhi Police Tuesday said it has served notice on the AAP candidate from Uttam Nagar assembly constituency and asked him to join the probe in connection with the recovery of a large haul of liquor in a house in the area.

"On Monday, we served him (Balyan) notice, but he did not turn up. Today (Tuesday), we served him another notice... hope he will come soon," Bassi told media.

On Saturday, a team of Delhi Police's Crime Branch seized 497 cartons containing 8,352 bottles of liquor from a house in Uttam Nagar's Om Vihar area. The bottles were labelled "for sale in Haryana".

Police also registered a case under the Excise Act.

Joint Commissioner of Police Ravindra Yadav told IANS that the house belongs to a relative of Balyan.

"We have questioned many people in connection with the case. Balyan will also be questioned," said Yadav.

Balyan, however, did not respond even after repeated attempts on his phone by IANS.

The man who attended his mobile phone said: "Balyan is away. When he comes ... will ask him to talk to you."

Police said the liquor was brought to Delhi from Haryana's Bahadurgarh, and they have also informed the Election Commission about the incident.

Balyan, who is a municipal councillor from Nawada in the South Delhi Municipal Corporation, is contesting the assembly election from Uttam Nagar.