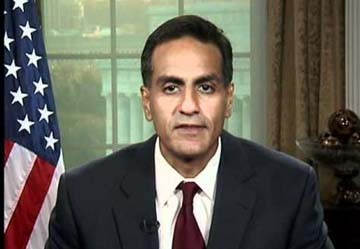 New Delhi, Feb 5
The recent US recent proposal to give $1 billion aid to Pakistan is in "collective interest for the region" and Washington's relations with India "stand on their own", US envoy to India Richard Verma said here Thursday.

Verma, who took over as envoy ahead of US President Barack Obama's three-day India visit last month, said ties between the US and India are not directed at any third country and that Washington views a "robust dialogue" between India and China as "in the interest of the region".

To a question on Obama's proposed over $1 billion in civilian and military aid to "strategically important" Pakistan for fighting terror and economic development, Verma said that the US aid was to see "a secure, democratic and stable Pakistan, the policy is designed for that and for the regions interest".

"It is in the collective interest for the region that the people of Pakistan continue to support democracy and stability in Pakistan," he said.

On the US' ties with Pakistan and with India, he said the US can "have a robust relationship with India and also with Pakistan; and we should recognise that the relations are also very different".

He added that the US was "watching very closely" the developments in Pakistan.

Verma said that Obama has reiterated that the US has very important relations with China marked by "elements of cooperation and competition" and where they have any concerns regarding human rights and security with Beijing they address them.

To a question on the US drawing a distinction between Afghanistan's Taliban and the Islamic State, and describing the Taliban as "armed insurgency", Verma said India and the US are "unified in their approach in standing up for free people and against terrorists, and the commitment is unwavering".

He said the US-India cooperation in the sphere of defence and homeland security shows their "commitment to stand up for free people and against dangerous groups".

He also termed as "very significant" the US-India defence cooperation agreement, and said both sides would focus on this area over the next few months.

Earlier, in his remarks at the Vivekananda International Foundation on 'US-India Relations: The Way Forward', Verma said he is committed to working on taking forward Obama's vision of the US as India's "best partner".

He said the camaraderie and dialogue between Obama and Modi "was the recognition on both sides of an increasing convergence of interests between the two sides in the fields of trade, security cooperation, civil nuclear collaboration, clean energy, climate change and "respect for religious diversity".

Verma said he will personally lead multiple working groups "towards implementation of the projects".

Verma said he had an "excellent meeting" with Modi in the morning and would be meeting Foreign Secretary S. Jaishankar.

"Bottom line is both our governments are full steam ahead toward achieving the objectives" of Obama and Modi.

Verma said the US welcomes India's interest in joining the Asia Pacific Economic
Cooperation (APEC) forum and also to working with India "to strengthen the East Asia Summit to promote regional dialogue on key political and security issues".