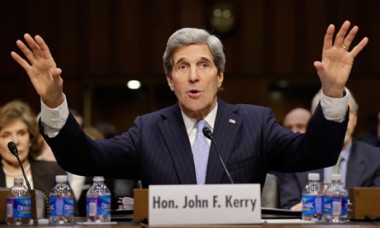 Washington, March 12
US Secretary of State John Kerry on Wednesday refuted the claim by a group of Republican senators in a letter that an agreement on Iran's nuclear programme not approved by the Congress would lapse.

Kerry said that the Congress could not modify the terms of a potential nuclear agreement between the world powers and Iran, according to a Xinhua report.

"It's incorrect when it (the senators' letter) says that Congress could actually modify the terms of an agreement at any time. That's flat wrong," Kerry told lawmakers. "They don't have the right to modify an agreement reached, executive-to-executive, between leaders of a country."

Kerry told the Senate Foreign Relations Committee that the US was not negotiating a "legally binding plan", but one that has "a capacity for enforcement".

Almost 50 Republican senators warned Iran in a letter made public on Monday that an agreement on its nuclear programme that is not approved by the US Congress could lapse as soon as President Barack Obama left the White House in less than two years.

"We will consider any agreement regarding your nuclear weapons programme that is not approved by the Congress as nothing more than an executive agreement between President Obama and Ayatollah Khamenei," said the senators in the missive.

"The next president could revoke such an executive agreement with the stroke of a pen and future Congresses could modify the terms of the agreement at any time," the letter read.

The rare move of Congressional intervention on US foreign policy drew criticism from the White House, with Vice President Joe Biden dismissing it as "a dangerous mistake to scuttle a peaceful resolution" of the Iranian nuclear issue.

The negotiations between Iran and the P5+1 group of world powers, consisting of Britain, France, China, Russia and Germany, over Iran's nuclear programme hope to reach a framework deal by the end of March.

The deal would likely oblige Iran to cut back its nuclear programme, reportedly for at least 10 years, in exchange for a loosening of crippling economic sanctions. A comprehensive pact was to be achieved by the end of June.

On Wednesday, Kerry said that his reaction to the letter was one of "utter disbelief", adding that it "ignores more than two centuries of precedent in the conduct of American foreign policy".

He also warned that the Republicans' move could harm global trust in the US.

"This risks undermining the confidence that foreign governments, in thousands of important agreements, commit to...” he said.

Many members of the US Congress are concerned, however, that the Obama administration will agree to a deal that is not strict enough, or that simply delays Iran's ability to get a nuclear weapon.

Iran has dismissed the warning by the US Republican senators' letter as having "no legal value" and "mostly a propaganda ploy".