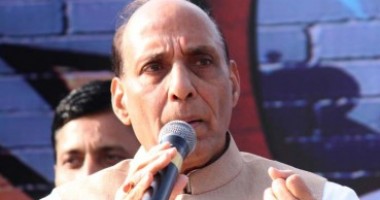 Kolkata, April 1
A day after West Bengal Chief Minister Mamata Banerjee questioned the motive behind it, union Home Minister Rajnath Singh on Wednesday said his tour of border enclaves in the state was not a political one.

Claiming that her government was not informed about Singh's two-day visit, a miffed Banerjee had on Tuesday slammed the BJP-led central government.

"Is it an official visit or a political visit," Banerjee had asked, claiming that no prior discussion or consultation was done with her government about Singh's trip.

Singh asserted that his was an official visit and claimed that Banerjee too was an old friend.

"No, it's not a political visit. I feel there should not be any confusion regarding this," Singh told mediapersons.

"The (home) ministry has certain defined works to carry out and I am here to do that," said Singh during his visit to a floating border outpost in the Sundarbans in North 24 Parganas district.

"Mamata Banerjee is an old friend and I respect her a lot. We share a cordial relation and I feel there should not be any misconception regarding this," added Singh who during the day visited Angrail border outpost in the district and also inspected a stretch of riverine border on the Icchamati river.

Besides holding talks with officers of the Border Security Force (BSF) and the Border Guard Bangladesh (BGB), Singh on Tuesday visited a Bangladeshi enclave in Balapukhri in Cooch Behar district taking stock of the ground reality in the area ahead of the implementation of the Land Boundary Agreement with Bangladesh.