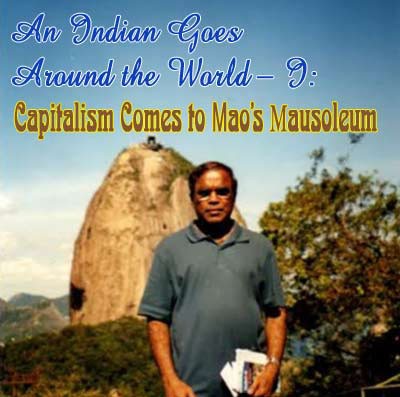 (This is Chapter 22 from Mr. Prabhakaran’s book, An Indian Goes Around the World – I: Capitalism Comes to Mao’s Mausoleum, which we have been serializing in this space. Chapter 23, “My Encounter with a Tamil Tiger Who Wants to Destroy India,” will be published next week. Read the series every Monday. – Editor)

You may have read volumes and volumes about Nazi concentration camps. You may have seen pictures and pictures of the atrocities the Nazis committed in those camps. But setting foot in what was once an actual concentration camp is an entirely different experience. It evokes an eerie feeling in you. I had such a feeling when I visited the Nazi Concentration Camp Memorial at Dachau, Germany, on August 15, 2008.

The Nazis came to power in Germany on January 30, 1933. They anointed Adolf Hitler as Chancellor of their proud reich. Reich in the German language means empire. Germany under Nazi rule (1933-1945) was also known as the Third Reich.

“Taking care” of all political enemies was the first item the Third Reich had on its agenda. The first step toward carrying out that agenda was to imprison all those enemies. But those whom the Nazis branded as enemies were too numerous for the space available in existing prisons. And they were in no mood to wait until new prisons could be built to incarcerate the enemies. They decided to convert an abandoned munitions factory at Dachau, 10 miles from Munich, into a makeshift concentration camp. In due course, the old factory building was demolished and a full-fledged, 32-barrack camp came up in its place. Prison labor came in handy for its construction.

Heinrich Himmler, the police chief of Munich, officially opened the camp on March 22, 1933. When, at the opening ceremony, he called it “the first concentration camp for political prisoners,” he was indirectly declaring that many more such camps would soon follow. And many more did, all modeled on the one at Dachau. The Dachau camp also served as a training facility for guards and officials who would run the subsequent camps. Adolf Eichmann, “the architect of the Holocaust,” and Rudolf Hess, who rose to become Hitler’s first deputy before he fell out of his favor, were among those trained at Dachau.

Though anti-Semitism had been an integral part of the Nazi ideology from the very beginning, singling out Jews for persecution had not yet become an official Nazi policy at the time the Dachau camp was opened. The enemy list at the time consisted mainly of Communists, Social Democrats, trade unionists, and others who opposed the Nazi ideology. If there were Jews in the first batch of internees at Dachau, it was not because they were Jews but because they belonged to one or other of the groups in the enemy list. In fact, the internee, whose memorable words are quoted even now to castigate those who refuse to see evil as long as it doesn’t affect them, was not a Jew. He was a Lutheran pastor. The words of Pastor Martin Niemöller (as translated by Bob Berkovitz), which stirred the collective conscience of the world when they were first published, are:

When the Nazis arrested the Communists,

I said nothing; after all, I was not a Communist.

When they locked up the Social Democrats,

I said nothing; after all, I was not a Social Democrat.

When they arrested the trade unionists,

I said nothing; after all, I was not a trade unionist.

When they arrested the Jews,

I said nothing; after all, I was not a Jew.

When they arrested me, there was no longer anyone who could protest.

Jewish prisoners began to arrive at Dachau in large numbers in the aftermath of “Kristallnacht” or “The Night of Broken Glass.” The notorious incident occurred on the night of November 9, 1938, when news reached the Nazis of the assassination of Ernst vom Rath, a diplomat of the Third Reich working in Paris. The assassin was Herschel Grynszpan, a 17-year-old, German-born Jew. His parents were Polish immigrants in Germany. The reason he gave for his action was the humiliation his father and other members of his family suffered at the hands of the Nazis back home. On October 27, Grynszpan’s family and over 15,000 other Jews, all of whom were originally from Poland, had been expelled from Germany without any warning. They were put in boxcars, taken by train to the Polish border, and dumped there.

“Final Solution of the Jewish Question”

Even before Kristallnacht, discrimination against Jews had become an official policy of the Third Reich. It attained legal status in 1935, with the enactment of what was called the Nuremberg Laws. The laws began to be enforced with a vengeance in the wake of the Nazi diplomat’s assassination in Paris by a Jew. With that enforcement, discrimination against Jews began to take the form of state-sponsored persecution. Hitler and his propaganda minister Joseph Goebbels incited their fellow Nazis to “rise in bloody vengeance against the Jews.” Their vengeful acts led to the deaths of 91 Jews and arrests of over 25,000. More than 200 synagogues were destroyed and thousands of Jewish homes and businesses were ransacked. Of those arrested, over 10,000 were brought to the Dachau camp. The finale of the state-sponsored persecution was the Holocaust, which was the answer that Hitler’s sick mind came up with after searching for a “Final Solution of the Jewish Question.”

Dachau predated the “Final Solution” policy. That policy was pursued at concentration camps set up later, such as the one at Auschwitz. Of the 31,591 registered prisoners who died at Dachau (the actual number will never be known because the Nazis didn’t bother to register thousands of those whom were randomly caught and brought to Dachau), only about 5,000 were Jews. They all died because of the harsh conditions that prevailed in the camp. How harsh were those conditions? The daily routine they were forced to follow should give an idea.

From the wake-up call at 4 a.m. (which was mercifully moved to 5 a.m. in the wintertime), till the “Everyone in Bed” order at 9 p.m., all were kept busy doing something or other. Even the roll call was a form of rigorous punishment. A photo captioned “Prisoners at roll call,” taken by Friedrich Franz Bauer and commissioned by the Nazis themselves, has this text underneath: “In the morning and the evening the prisoners had to line up in the roll call area to be counted. Irrespective of the weather, they were forced to stand at attention. The torture could drag out for hours.”

The motto of the camp was “ARBEIT MACHT FREI [work makes one free].” Visitors to the memorial can see it displayed on the main gate. True to the motto, the inmates were made to work all their waking hours. They were employed in the operation of the camp, in various construction projects, and in small handicraft industries established in the camp. They built roads, worked in gravel pits, and drained marshes. At the height of World War II, they were also used in armaments production. Those who were found unfit to work were summarily executed. The firing range and the gallows in the crematoria area still bear evidence to it. Some of the sick and weak prisoners were sent to the euthanasia center set up in the Hartheim castle, in the Austrian village of Alkoven, near Linz. Several thousand Dachau prisoners were killed at the Hartheim euthanasia center.

Hundreds of prisoners also died or were permanently disabled as a result of experiments conducted on them by Nazi physicians. Prisoners were used as guinea pigs – in high-altitude experiments (using a decompression chamber), malaria and tuberculosis experiments, hypothermia experiments, and experiments to test new medications. Prisoners were also forced to test methods of making seawater potable and of halting excessive bleeding.

A note left behind by one of the prisoners still hangs on the wall of the cell in which he languished. Its English translation reads: “Four months in the Bunker, four months’ detention in darkness, four months with hot food only every fourth day! Time crawls by. I only count every fourth day, and I’m amazed when the food comes and wakes me up – I’m in a state of trance.”

The note was written by one Erwin Gostner, the prisoner in Cell No. 19, in July 1938. (That he at least remembered the month is remarkable.) After reading the note, I stood still for a while in front of the cell. “Was he left for dead by guards, when they came around at reveille to make sure that all prisoners were out of their cells, and in the roll-call area?” I wondered.

American liberators arrived at Dachau on April 29, 1945. As they came close to the camp, they found more than 30 railroad cars filled with bodies, all in an advanced state of decomposition. They later learned that those bodies were of prisoners whom the Nazis had hastily evacuated from camps in the front areas, before Americans could rescue them, and brought to Dachau.

When the American troops entered the Dachau camp, they found over 30,000 inmates crowded into an area that was built for 5,000. Not long before the liberation, there were 67,000 registered prisoners at the Dachau camp. As news reached prison officials of the imminent arrival of Americans, they had pushed thousands of prisoners out of the camp and put on a “death march.” Several thousand died in that march. Those who survived were rescued by Americans later.

In the words of the late Lt. Gen. William W. Quinn, who as a colonel in the Seventh U.S. Army had participated in the Dachau liberation, “Dachau, 1933-1945, will stand for all time as one of history’s most gruesome symbols of inhumanity. There our troops found sights, sounds and stenches beyond belief, cruelties so enormous as to be incomprehensible to the normal mind. Dachau and death were synonymous.”

Photos:
This picture is displayed in the photo section of the Dachau Concentration Camp Memorial, near Munich, Germany. The caption to the picture reads: “Dead prisoners outside the death chamber near the Infirmary Block B, after the liberation [of the camp by American soldiers, on April 29, 1945].”


One of the several rows of dark cells in the Dachau Concentration Camp. On the wall of Cell No. 19 hangs a note written by its occupant, Erwin Gostner. The English translation of the note reads: “Four months in the Bunker, four months’ detention in darkness, four months with hot food only every fourth day! Time crawls by. I only count every fourth day, and I’m amazed when the food comes and wakes me up – I’m in a state of trance.”