Growing concern in US over threats to tolerance in India: Rahul 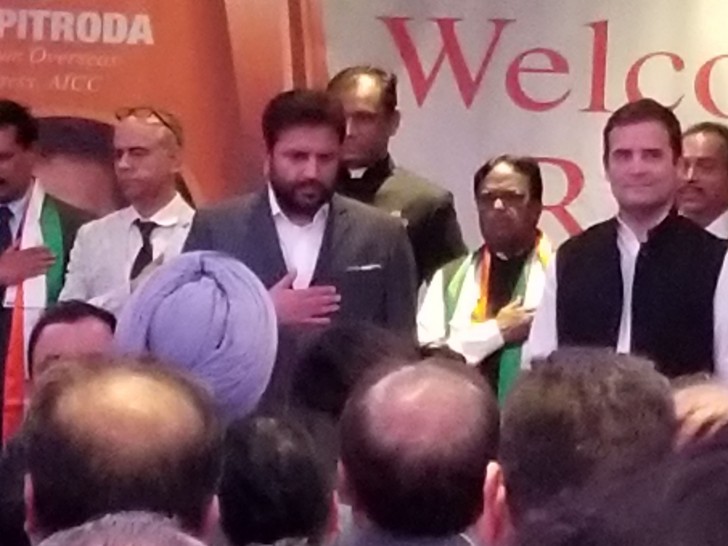 New York, Sep 21
Congress Vice President Rahul Gandhi asserted that there was a growing concern in the US over threats to tolerance in India and asked the Non-Resident Indians (NRIs) to stand up against the "forces" that helped in dividing the nation.

Speaking at a meeting on Wednesday organised here by the Indian National Overseas Congress (INOC), he said that during his current visit to the US, he met people from the Administration and also member of the Republican and Democratic parties who asked him: "What happened to the tolerance that prevailed in India? What happened to the harmony?"


"The divisive politics was ruining India's reputation abroad and NRIs in the tradition of the great NRIs before them, should stand up to those dividing India now," the Congress Vice President said

"Across the world, populism and intolerance were on the rise and the world was wondering if India has the answers for bringing about peace."

About 2,000 people attended the event held at a hotel in Times Square as a part of the Congress Party's drive to build up its ranks among the NRIs.

While the Bharatiya Janata Party (BJP) has a comparatively more visible presence among the community, Congress sympathisers were more vocal in academia and the media.

In his speech, he described the Congress as a "party of the NRIs", citing leaders of the freedom movement who returned to India to lead the party.

His speech was interrupted often by cheers from the audience.

Gandhi said that NRIs can contribute to India from where they were or if they returned home. He mentioned Verghese Kurien, who in the post-Independent India returned from the US and brought about the white revolution that transformed the dairy industry.

"The challenge in India was to create jobs for the 30,000 young people who enter the job market every day, and of whom only 450 get employed."

He said the "current focus on 50 or 60 big companies for economic growth was not going to solve the problem and only growing small and medium scale enterprises and encouraging entrepreneurship will work".

"Millions of jobs can be created in agriculture and food," he said.

Another proposal was to network the Indian Institute of Technology's and leading universities with the industry to make them world class institutions leading in innovation.

His party had the vision for transforming India and creating jobs for the youth, he added.

Gandhi hailed Sam Pitroda, who was an adviser to his father Rajiv Gandhi and to Prime Minister Manmohan Singh, as another NRI who through his work on telecommunications helped transform India.

Pitroda, who has taken over the NRI mission of the Congress as the chairman of its Overseas Department, organised Rahul Gandhi's US visit.

"He (Rahul Gandhi) is not what the media makes him out to be... Others should not define him," Pitroda said, adding "People see it for themselves."

Pitroda said that the party's immediate goal was to increase its 18 overseas units to 30 and set up chapters in every major US city.

The BJP has grown itself in the diaspora through social media.

"Use social media responsibly," Pitroda exhorted the audience, telling them to stay away from fake news and divisive messages.

The meeting was held under tight security with attendees given wristbands and screened with metal detectors.

Outside the hotel a small group of Sikhs held a protest against the Congress Party's role in the 1984 riots.