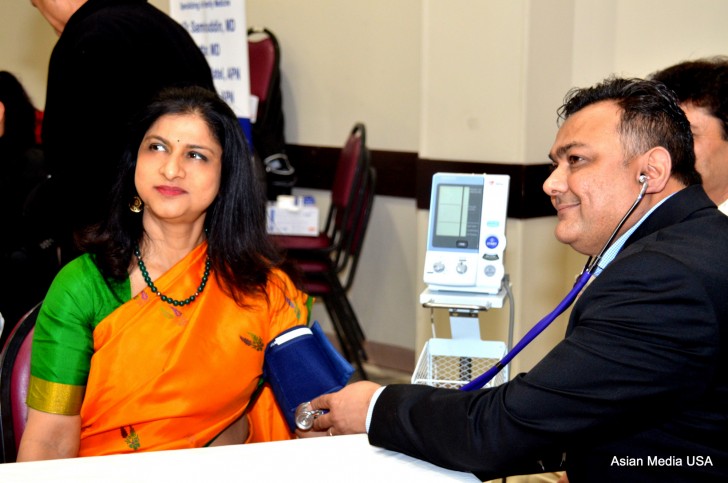 The event attracted more than one thousand people from the community who took advantage of the various services offered. The Blood Collection Drive was conducted by Heartland Blood Centers. The Health and Wellness Camp saw more than 25 doctors in attendance comprising of dentists, Internal Medicine, Orthopedic, Optometric, Cardiologist, Chiropractors, Urologists, Physiotherapists and Podiatrist taking care of people, around 325 people had their blood and other vitals checked, and more than 55 had an on the spot EKG taken for their heart issues, while others went on to see other doctors with their general and specific health issues starting rom dental issues, general and specific health issues, orthopedic issues, heart issues not to forget muscle and joint issues.

There were booths with experts and counselors giving people advice on Medicare and Medicaid, in home help for seniors, taxation advice, and college admission counseling and passport and visa advice booth with officers from the Indian Consulate in Chicago.

The event began with the American National Anthem sung by Ashika Sachdev followed by the Indian National anthem sung by Geetanjali Maru. Sunil Shah, Founder President, in his speech welcomed the dignitaries to the event and appreciated volunteers who gave their valuable time for this event. Onkar Singh Sanga and Mukesh Shah (Past President) in their speeches welcomed and thanked the volunteers for showing up in large numbers for this community event, spending their valuable time to serve the community and welcomed all the dignitaries and the FIA Board on the stage.

“This type of event would be the ongoing theme for the FIA. We are opening of non-emergency FIA Toll Free number 1 (833) FIA CARE. I thank all the supporters, doctors and volunteers and dignitaries for joining us in an overwhelming majority at this event, said Neil Khot, the current FIA president.

The traditional lamp lighting ceremony was performed once the dignitaries and the FIA board were on the stage. The dignitaries in their brief speeches extolled and praised the development India has seen since independence and the India USA collaboration in various fields and the friendship between the leaders of both the democracies. The FIA was praised by all the dignitaries for its growth over the last eight odd years. A progress that had put FIA in the forefront among Indian community organizations. Some even put FIA as the best organization amongst all other Indian community organizations.

Woman gets death sentence for blasphemy in Lahore

US prepared to meet N.Korea without any conditions: State Dept

US Deputy Secretary of State to visit India

Biden has no plans to call Imran Khan soon: Spokesperson

Funeral homes in US state run out of storage amid resurgence