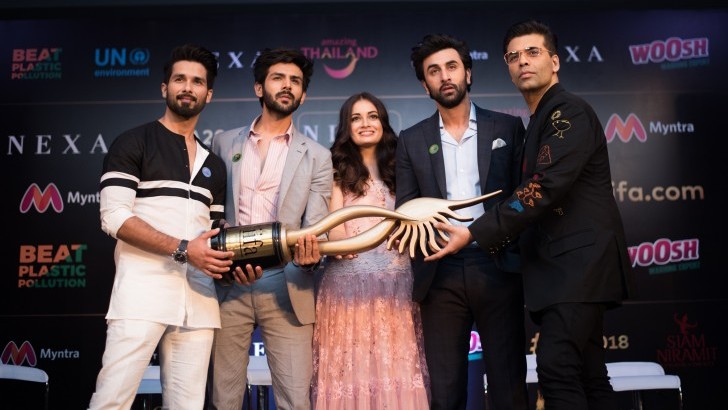 17th May 2018, Delhi: IIFA fever returns to Bangkok, Thailand exactly after a decade with the 19th edition of the NEXA IIFA Awards styled by Myntra. Bangkok would play host to a mélange of glitz, glamour and Bollywood’s finest talent, global dignitaries, world media, Indian cinema fans and enthusiasts from across the globe at the highly anticipated star-studded weekend from 22nd & 24th June, at the reputed Siam Niramit Theatre.

NEXA IIFA Awards is all set to take place at the gem of Bangkok’s entertainment scene, the grandiose Siam Niramit, which is adorned by Thailand’s heritage, art and culture and hosts the country’s most-popular theatre production and a must-see show.

A stellar line-up of hosts and performances were revealed!

Fans of the biggest celebration of Indian cinema will see the rising star Kartik Aaryan and the talented Ayushmann Khurrana host the vibrant IIFA Rocks 2018. The star-studded NEXA IIFA Awards would be hosted by Karan Johar and Riteish Deshmukh who are all set to mesmerize the audiences with their charismatic energy.

The first set of performers revealed for the NEXA IIFA Awards include swashbuckling performances by Bollywood megastars Ranbir Kapoor and Shahid Kapoor. The organisers shared that over the next couple of weeks more performers would be revealed.

This year, IIFA has proudly partnered with Woosh Washing Expert, to support the cause of equality at home - ‘Barabari Ghar Se Shuru’. This partnership provides a platform to contribute and raise awareness for Women Empowerment and Gender Equality.

In its continuing effort to campaign about environment protection, the IIFAs and the United Nations Environment have come together to campaign, “Beat Plastic Pollution”, the theme for World Environment Day, 2018. With India as the host of World Environment Day (WED) IIFA-UN would combine the voice of celebrity with the power of the IIFA platform and reach to combat one of the greatest environmental challenges of our time. The UN continues its partnership with IIFA this year with a collaborative advocacy campaign to tackle the pressing issue of plastic pollution, under the aegis of Greening the IIFA.

Additionally, as part of its commitment to preserving cinema heritage, this year IIFA Foundation will be collaborating with OSIAN’s auction house, India’s foremost Arts and cultural Institution & Auction House, to showcase vintage cinema memorabilia at an exhibition event which will be held at the Bangkok Marriott Marquis, Queens Park hotel from June 21st to June 23rd. A glimpse of the memorabilia was displayed at the press conference.

Commenting on the occasion, Karan Johar said, “I was privileged to be at the Millennium Dome in London when the IIFAs were born and I’ve participated in the journey across the world. My father and I have been part of the IIFA Advisory Board and share the passion to take Indian cinema across the world. The impact of the IIFAs can be felt in the growth of distribution and film incentives in key markets around the globe. I wish the IIFAs well and more power to the organizing team of Wizcraft.”

Commenting on the association, Mr.Stapanaseth Isra, Director, Tourism Authority of Thailand New Delhi Office said, “IIFA 2018 will prove to be beneficial for the publicity of Thailand’s tourism industry, which will contribute to enhancing the positive image of the country and attract Indian tourists by showcasing a variety of tourism products Thailand has to offer. The event also complies with TAT’s directions to promote Thailand as a preferred destination for Indians.”

Speaking on the association, Mr. R.S. Kalsi, Sr. Executive, Director-Marketing & Sales, Maruti Suzuki India Limited said “Our country is changing at a rapid pace and so are the aspirations of our new- age customers. The sophisticated, discerning and highly ambitious customers want to enjoy higher level of experiences when they are buying a car. At NEXA we are providing them just that by offering them the best car buying experience that meets global standards.

There’s no denying that Indian Cinema today has made its global mark with innovative ideas, great technology, and a creative outlook. And IIFA, being the global flag bearer of Indian films recognises and honours this talent. That’s why IIFA is such a perfect fit with NEXA’s vision. As partners for 4 years, we have grown together to provide audiences more exciting and innovative experiences.”

Sharing his thoughts, Ranbir Kapoor commented, “IIFA Bangkok holds a very special place in my heart, I won the best debutante award at IIFA 2008 in Bangkok. The 19th Edition of IIFA Weekend And Awards is going to be a great one and I am eager to connect with my fans and look forward to giving a power-packed performance.”

Speaking on the association, Ms. Gunjan Soni, CMO, Myntra and Head, Jabong said, “As the style partner and Co-Powered By sponsor of IIFA-2018, we at Myntra are working towards a liaison between fashion and Bollywood Indian cinema. We are not going to be a passive sponsor but are working with IIFA on several properties like a stoppable fashion show that offer the consumers the opportunity to own and experience the personal fashion choices of their favourite celebrities. The previous edition of IIFA held in New York, with Myntra as the style partner was a huge success for us, and was positively received by Myntra users. We expect this visibility to grow further during the current edition in Bangkok. We are very excited and look forward to the event. "

Expressing his excitement, Shahid Kapoor said, “IIFA has always been close to my heart and it its 19th year IIFA is all set to recreate memories in Bangkok for the second time. I am thrilled to be performing at the spectacular awards night and what better venue than the treasured Siam Niramit.”

Kartik Aaryan added saying, “I am excited to debut as a host at IIFA Rocks this year. As an actor, you always want to be a part of something as big as IIFA, whether to perform or host. IIFA certainly gives you the biggest audience to entertain with your performance and I look forward to hosting a great show. Like every Bollywood fan, I too am looking forward to IIFA Bangkok".

Andre Timmins, Director- Wizcraft International, the producers and creators of the IIFAs said, “We are pleased to be taking IIFA back to Bangkok after 10 years. IIFA has grown over this decade and we are excited to celebrate the grandeur and excitement in Amazing Thailand. Vibrant Bangkok is the perfect host to welcome and embrace the spirit of Bollywood like no other and it’s a pleasure to see Thailand welcome IIFA with open arms for the second time. IIFA continues the endeavour to build bridges between countries, communities and cultures and increase businesses such as tourism, wedding and MICE among others for host destinations.”

Commenting on their association, Mr. Yogesh Jain, Managing Director, Woosh Washing Expert said, “We’re glad to announce Woosh Washing Expert as a Proud Cause Partner of IIFA 2018. As we believe in the power of gender equality and women empowerment, We’re proud to support the cause- Equality Begins At Home”. Let’s all support ‘Barabari Ghar Se Shuru’.

Commenting on the association, Khun Pannin, Founder, Siam Niramit said “Indian Cinema has grown continuously over the years to attain its current status as a top player in the world film industry. IIFA has grown with it, producing ever more exceptional events at amazing venues throughout the world. This year, Siam Niramit is honored and delighted to welcome IIFA back to Bangkok as we play host for the second time in 10 years. We are very excited to collaborate with IIFA to bring this extraordinary world event to our country.”

IIFA is dedicated to building bridges across cinemas, businesses, communities and nations, creating everyone’s dream: “One People. One World”. The 19th Edition NEXA IIFA Awards Styled by Myntra aims to bring the magic of Indian cinema not only to Bangkok but also to the whole of South-East Asia.

The 19th edition kick-started on April 27th with the IIFA Voting Weekend commencing the peer voting process for the NEXA IIFA Awards styled by Myntra, which saw members of the Indian Film Industry show their support to IIFA as they came forward to vote for their peers. The auditors of the Awards process, EY, would soon be revealing the nominations of the Popular Awards which would then be open for public voting on iifa.com

Fans and media are welcome to keep abreast of the latest news and details on IIFA and Hindi cinema by logging on to www.iifa.com or checking out the social media handles:

Conceptualized and produced by Wizcraft International and supported by the key members of the Indian film fraternity, IIFA is the most appreciated South Asian film academy and a global platform that gives the Indian film fraternity an opportunity to reach audiences in international territories. The alliances made via the platform of IIFA provide huge benefits and gain to India and an equally important objective is to create similar benefits in the host country. The aim is to establish a system of mutual benefit to both India as well as the host destinations by boosting tourism, economic development, trade, culture, cross-border investments and film co-productions.

Wizcraft International promotes the IIFA Weekend & Awards globally each year and travel to new, exciting and beautiful destinations, taking the film fraternity to unite and celebrate the best of Indian film and culture, thereby taking Indian Cinema and India to a wider audience. www.iifa.com

Wizcraft International Entertainment, India’s leading media and Entertainment Company is dedicated to showcasing its expertise on the world stage. Having conceptualized some of the grandest events globally including the 50 Years of Indian Independence, the 30 Years of Mauritian Independence, the 10 years of the South African Freedom Struggle, the Commonwealth Games Opening and Closing ceremonies in Delhi as well as the Handover ceremony of the Commonwealth Games in Melbourne, & the prestigious International Indian Film Academy (IIFA) Awards & Weekend for 18 years in over 12 countries, Wizcraft has contributed towards brand building for India across the world. It has pioneered and developed India’s biggest entertainment brand IIFA which has taken Indian Cinema and culture to the world. The growth story of the company reflects the evolution of the Indian event management & entertainment industry itself. Driven by its vision “Believe in the power of dreams” the company is committed to quality and innovation, while setting its sights on greater peaks of achievement.

Bhavana returns to Malayalam cinema after 5 years, film's trailer out

Congress in Kerala says 'no' to hartal