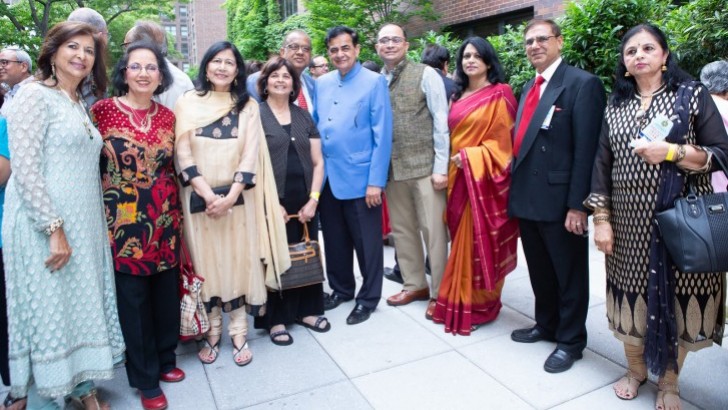 June 9, 2018 At Marymount Manhattan College, in Manhattan, NY:The Association of Indians in America, NY Chapter (AIA-NY) hosted its Fund Raising Event “Spread Hope” at the Marymount Manhattan College, in New York City on Saturday, June 9th. Project India – a Philanthropic arm of AIA is committed to serving the needs of the underserved in India.
Event was completely sold out and was a huge success. It was attended by an elite crowd of over 250 people; including prominent individuals such as Dr. Dattatreyudu Nori, Kalpana and Amit Doshi, Dr. Sudha and Sudhir Parikh, Asmita and Arun Bhatia.Indian Consul General Ambassador SandeepChakravorty was the Chief Guest.
The Project India Team shared its journey, which had a humble beginning about 10 ten years ago, in response to the rampant spread of HIV/AIDS in India.
In the past decade, AIA’s partnerships with a renowned NGO called Gujarat AIDS Awareness and Prevention (GAP), located in Ahmedabad, and supported by a group of Physicians of the Brooklyn Hospital, have made immense strides in making a measurable difference in the lives of thousands in rural and tribal villages. Programs have evolved as the Team gained more experience and the attention today is on Comprehensive Healthcare of Women and Children.
The Program today serves over 2,000 families across 80 rural and tribal villages along the border of Gujarat and Rajasthan, which have minimal access to medical care. Programs are monitored, evaluated and refined to align with the need and outcomes.
The visual Presentation at the event highlighted key programs of Project India. The scope, scale and significant results in “Spreading Hope” awed all in the audience. Annual Medical Camps, Teachers Training, Mamta Day (Women’s Health Checkup) Bal Gopal/Bal Mukul (Orphans living with HIV/AIDS) and Prevention of HIV from Mother to Child were cited to be most effective. Project India team member Asmita Bhatia emphasized that the results are encouraging due to the dedication of trained workers, earned trust of the villagers and local Panchayats and School authorities. Emphatic reminder was expressed that much work is needed and that every dollar raised goes directly to the help of the needy.
The programs resonated deeply with the night’s keynote speaker, Ambassador Sandeep Chakravarty who engaged the crowd with his personal story and admiration towards the Association of Indians in America and its efforts with Project India.
The evening also included a musical theater with its North American Premiere, called Three Women, written, directed by IsheetaGanguly. The play was based on the character of Rabindranath Tagore, showcasing the dilemma of women in the past and the present. All actors Avantika Akerkar, Mahima Saigal, Zayn Marie Khan; narrator Samrat Chakrabarti and musician Abhishek Chauhan did a tremendous job and garnered a standing ovation.
The Artists travelled from India, sponsored by Cheapoair and Turkish Airways.
The Venue of Marymount Manhattan College, East 71st street was beautiful. AIA thanked their executive Vice President Mr. Paul Ciraulo and President Kerry Walkof the College, for its support.
AIA New York Chapter President, Mr. Gobind Munjal, welcomed everybody and invited all to the 31st Deepavali Festival on Sunday October 7, 2018 at the South Street Seaport in Manhattan, as well as Deepavali Benefit Gala on Sept 22, 2018 at Leonard’s Palazzo in Long Island.
The Association of Indians in America (AIA) is the oldest not-for-profit organization of Asian Indians in America founded on August 20, 1967. It is the grassroots national organization of Asian immigrants in the United States. With chapters and membership spread across the United States of America, AIA represents the hopes and aspirations of those immigrants who are united by their common bond of Indian Heritage and American Commitment.
Please visit the website: projectindiaaia.org for more information.