Is Corporate 7-Eleven Conspiring with ICE Against Immigrant-Owned Stores? 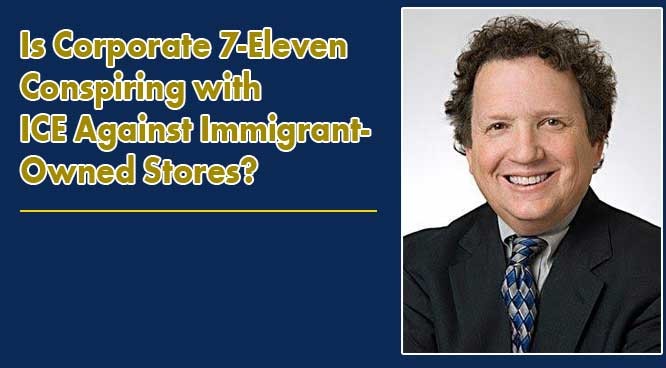 A recent Bloomberg story (https://www.bloomberg.com/news/features/2018-11-09/7-eleven-is-at-war-with-its-own-franchisees-over-ice-raids), by reporters Lauren Etter and Michael Smith, offers some insight into why ICE may have targeted 7-Eleven franchisees. According to the story, 7-Eleven had "given the names of franchisees to the government," and ICE conducted I-9 audits on several franchisees who have engaged in legal disputes with the company or vocally criticized 7-Eleven’s CEO Joe DePinto. Company policy states that the corporation can take stores back from franchisees found to be violating immigration law.

7-Eleven, Inc. issued a statement stating each of the stores is a franchise, who is “solely responsible for their employees, including who to hire and verifying their eligibility to work in the United States.” However, this statement seems to contradict a prior statement by 7-Eleven’s statement. In 2014, after indictments and convictions of five franchisees in New York and Virginia for harboring undocumented workers and wire fraud, 7-Eleven’s corporate office stated it would “take aggressive actions to audit the employment status of all of its franchisees’ employees.”

Many 7-Eleven franchisees are immigrants from India and other Asian countries who first started working at 7-Eleven when they arrived in the United States and thereafter saved enough money to purchase a franchise.

7-Eleven's reported utilization of the Trump administration's immigration policy as a means to sever ties with problem franchisees is not without precedent. "There's a long history of unscrupulous employers using ICE for the purposes of retaliation and intimidation, and these allegations should be thoroughly investigated," Layla Razavi, the policy director at the California Immigrant Policy Center, says.

If 7-Eleven corporate executives are participating in the Trump administration's anti-immigration policy, this is extremely worrisome. "As the Bloomberg piece suggests, it is all too easy for companies to use their collusion with ICE to target and retaliate against immigrant employees," Razavi says.
----
About the author
Bruce E. Buchanan is the founding partner at Sebelist Buchanan Law PLLC with offices in Nashville and Atlanta, where he primarily represents employers in all aspects of immigration law, with a special emphasis on employer immigration compliance, as well as employment/labor law matters. He is the co-author of the book, I-9 and E-Verify Handbook, which is geared to HR professionals. Mr. Buchanan also authors his own blog on employer immigration compliance matters located on Twitter at @Buchananvisalaw. He may be contacted at [email protected] and (615) 345-0266.