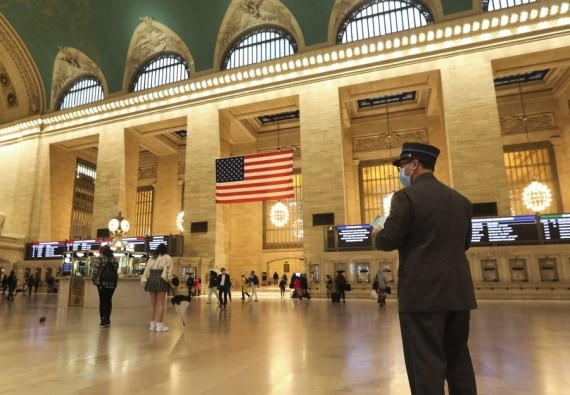 New York, Oct 29
The Metropolitan Transportation Authority (MTA), a corporation responsible for the public transportation in the US state of New York, is in dire need of a $12 billion bailout from the federal government due to a decreased ridership in the wake of the Covid-19 pandemic.

In a report on Wednesday, The Riders Alliance, a grassroots movement for public transit, quoted New York State Comptroller Thomas DiNapoli as saying that the MTA is facing its biggest budget crisis in history, reports Xinhua news agency.

The system's debt has reached $45 billion and would have to cut its subway and other public transportation services by 40 per cent, and the railway services by 50 percent, if without enough financial help, according to the MTA.

As a result of the downsize, certain groups in New York City would be disproportionately affected.

The Riders Alliance's Policy and Communications Director Danny Pearlstein said the impact of MTA budget cuts would be felt far beyond New York City and into the suburbs.

The MTA is the largest public transit authority in the US, serving 12 counties in Downstate New York, along with two counties in southwestern Connecticut under contract to the Connecticut Department of Transportation.

Prior to the Cpandemic, it carried over 11 million passengers on a daily week-day average, and over 850,000 vehicles on its seven toll bridges and two tunnels per day.

New York City Mayor Bill de Blasio has launched the Open Storefronts program, which will provide safe spaces for small businesses, hit by the ongoing Covid-19 pandemic, to rebound.Building on the success of the Open Restaurants and Open Streets programs, Open Storefronts, which will run from October 30 till December 31, will allow the businesses to use a portion of their sidewalk to display merchandise, sell goods, complete transactions, and provide queuing areas, Xinhua news agency reported."This program is a part of an effort to make New York City the world's capital for healthy outdoor living and to advance the Mayor's recovery agenda, which is centred on public health and social justice," Xinhua news agency quoted a statement from De Blasio's office as saying on Wednesday."Rebuilding a fairer, better New York City means maximizing use of our outdoor space, helping businesses keep their employees, and giving New Yorkers more reasons than ever to shop local and enjoy their communities. Open Storefronts does all three," the Mayor was quoted as saying in the statement."This program builds on the successful legacy of our Open Streets and Open Restaurants programs, and I look forward to finding more ways than ever to reimagine our urban landscape," he added.According to the program, an eight-foot clear path of sidewalk from the curb must be maintained for Open Storefronts to operate.Retailers cannot use the space of adjacent businesses, and they must bring all furniture and goods indoors when closed.Eight months into the pandemic in New York City, more than 1 million residents are out of work, and the unemployment rate is nearly double the national average, according to The New York Times.