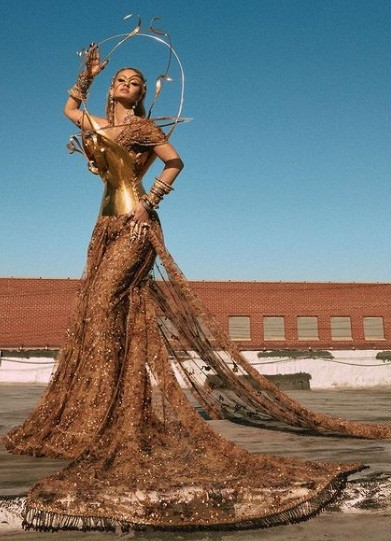 Her spectacular Met Gala gown was the topic of the night, but Natasha Poonawalla's name is familiar to many fashion fans around the world. The Indian businesswoman and philanthropist is as well-known for her fashion choices as she is for her jet-setting lifestyle and celebrity friends, as she is frequently seen at some of the world's most prestigious fashion events, mixing it up with everyone from Priyanka Chopra Jonas to Katy Perry and Christian Louboutin.

Sabyasachi, an Indian designer, produced the striking Met Gala ensemble she wore on Monday, which she paired with an intricate Schiaparelli Couture corset that wrapped over her head. Her interpretation of this year's theme, Gilded Glamour, which honoured New York's 19th century golden age between 1870 and 1890 and was accessorised with original Sabyasachi Fine Jewellery pieces, was one of the most memorable looks of the star-studded evening.

Natasha Poonawalla, who is she?

Natasha is the executive director of India's Serum Institute, the world's largest vaccine maker. Her spouse, Indian millionaire Adar Poonawalla, is the CEO of the firm, which makes the Covishield coronavirus vaccine developed by AstraZeneca and the University of Oxford, among other things. Natasha is also the chairwoman of the Villoo Poonawalla Charitable Foundation, which she co-founded with her late mother-in-law and which takes her to events all over the world.

Natasha was born and raised in Pune, Maharashtra. She went on to the London School of Economics for her master's degree. During this period, she met her future husband Adar during a New Year's Eve party in Goa, where she was on vacation.

"Every few months, we'd see each other. From the beginning, he was laser-focused. 'I like you,' he said. I'm certain I want to marry. This is the end', "She revealed

Adar is the sole child of Cyrus Poonawalla, the chairman of the Cyrus Poonawalla Group, which owns the Serum Institute of India. With an estimated fortune of $24.3 billion, Cyrus was rated fourth on Forbes magazine's India's 100 Richest People list last month. He is now ranked 56th in the world.

Natasha and Adar married in 2006 and have two sons, Cyrus and Darius, together.

"I believe I was slightly misjudged," she admits. "When people saw me dressed up, they said, 'She's the racecourse's fashion lady.' But I didn't feel compelled to tell everyone about the serious portion of my life."

During the coronavirus pandemic, her critical role as an executive of the Serum Institute of India was highlighted when her and her husband's company became a key player in India's fight against Covid-19.

"People have realised what I do this year," she tells

Her A-list friends, including Bollywood star Kareena Kapoor Khan and her sister Karisma Kapoor, as well as actresses Malaika Arora and her sister Amrita Arora, who all appear frequently on her Instagram account, are undeniable.

"There's nothing like pals who make you laugh nonstop," she once wrote beside a photo of the two of them on Instagram.

Natasha is frequently spotted with Chopra Jonas and her husband Nick, as well as Bollywood actress Sonam Kapoor and her spouse Anand Ahuja.

When the Jonases announced they were having their first child together via surrogacy in January, Natasha congratulated them and shared a photo of herself with them.

"PC and Nick, congratulations! I'm ecstatic for you... Prepare for the biggest thrill journey of your life! For this new chapter, I wish you all the love and strength in the world. From sleepless party nights to sleepless parenting nights, we'll be there for you "she stated

A fashionable existence
Natasha's debut at the Met Gala on Monday was not her first.

Her icy-blue custom-made outfit by designer Peter Dundas turned attention in 2019. The crystal adorned mini-dress, which was worn with a detachable blue draped skirt and a silver belt at the waist, matched the red carpet's theatrics. Natasha finished the ensemble with a diamond maang tikka on her forehead, a reference to her Indian background.

"To me, fashion is wearable art." "Art, in this sense, is communication because it allows people from all cultures and eras to communicate with one another through visuals, sounds, and tales," she explained. "I consider myself fortunate to be alive and grateful to having weathered the challenges that came with being a member of the pandemic response."