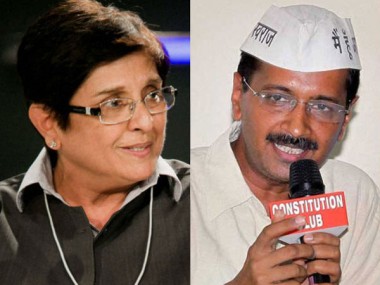 AAP leader and former Delhi chief minister Arvind Kejriwal has said he sees an inherent contradiction between what Kiran Bedi, BJP's presumptive chief ministerial candidate, was known to have stood for and the values and principles of the party she now represents.

"There are many issues... I am surprised how she will cope up with this and how she will explain (this) to the people and to herself," Kejriwal told IANS in an interview conducted in his car while heading for a party rally.

"I am surprised at her entry into the BJP because the BJP stands for exactly the opposite of what Kiran Bedi had always been saying she stands for," Kejriwal said.

Fighting a now-or-never election against the BJP and the Congress, Kejriwal also asserts that the middle class, disenchanted with him after he resigned last year after ruling Delhi for 49 days, was returning to the AAP in large numbers.

"Kiran Bedi talks of women's safety. But how can you have a person charged with rape in the (BJP-led) cabinet?"

Kejriwal, 46, and Bedi, 65, were close colleagues during the 2011 anti-corruption movement of Gandhian activist Anna Hazare that shook India. The two later had a fallout.

Bedi joined the Bharatiya Janata Party (BJP) last week. On Tuesday, she was named its chief ministerial candidate for the Feb 7 electoral battle in Delhi.

"She (Bedi) stands for transparency. But the BJP does not want to make its funding transparent," Kejriwal went on.

Speaking while on his way to a campaign rally in Palam area in south Delhi where large crowds greeted him, Kejriwal was confident of an AAP victory this time again.

"The last two opinion polls have placed us at number one (position)," Kejriwal told IANS.

"The middle class is coming back in large numbers (to our fold)," he asserted. "I am being honest. I myself used to say in interviews in August and September that the middle class was very angry with us.

"It is no more so. Now more and more people say they want to give them (AAP) one more chance."

According to him, the AAP's support base extended among all classes including lawyers, traders, industrialists and professionals. "Aren't they all middle class?"

Kejriwal, like Bedi a Ramon Magsaysay award winner, remains the AAP's best known face although the party's four MPs, all from Punjab, are also campaigning in Delhi.

Unlike in December 2013 when the AAP was largely unknown but stunned everyone by winning 28 of the 70 seats, Kejriwal says "99.9 percent of the people know us now... We are very confident of winning".

So what is the AAP's strength - and its weakness?

"Our 49 days of governance is the biggest factor in our favour," he said. "We did what we promised, be it power and water tariff, fighting corruption and controlling (food) prices."

The one area where Kejriwal admits the AAP has suffered a setback is diaspora support.

This, he says, is because of the greater appeal abroad of Prime Minister Narendra Modi.

Was his resignation after 49 days in office a mistake?

"Yes, it was a mistake," he says, a point he also makes at all his rallies. "It wasn't a crime. One thing we have learnt (in politics) is that you must never resign. And we will never again resign."
Support for the AAP among Indians living abroad has suffered a setback because of Prime Minister Narendra Modi's appeal, its leader Arvind Kejriwal has said.

"Yes, it's true that diaspora support has been affected due to Modi's appeal," Kejriwal told IANS in an interview.

An offshoot of an anti-corruption agitation, the AAP had attracted a number of expatriates who volunteered for the party in the run-up to the 2013 assembly polls in which it ousted the three-term Congress government in Delhi.

The outfit had also received huge donations from them.

In his official trips aboard, including to the US and Australia, Modi has had well-attended exclusive interactions with Indians abroad. He has also announced a slew of measures, including lifelong visas for Persons of Indian Origin.