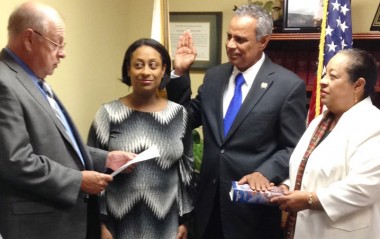 Former New Jersey Assemblyman Upendra Chivukula, who moved as a commissioner at the Board of Public Utilities said he is still a public servant, though in a different capacity. "I am empowered to exercise my intellect in addressing the challenges of the present and the future. But for running for office every two years and fundraising, I continue to engage in public, though in a different capacity."

Chivukula, the best known face of the Indian community in the tristate, became a commissioner four months ago. He submitted his resignation from the Assembly on September 30. “I am moving from the legislative branch to the executive branch,” Chivukula, who has been serving in the assembly since 2002, said then. “I take it as a great opportunity, honor and privilege, especially because I am probably one of the first South Asians to be appointed to the Board of Public Utilities,” Chivukula, who was chairman of the Assembly Telecommunications and Utilities Committee, said.

Chivukula took the oath on a Bhagavad Gita held by his wife Dayci.

The Board, a quasi-judicial body, is the state agency with authority to oversee the regulated utilities, which in turn provide critical services such as natural gas, electricity, water, telecommunications and cable television. The law requires the board to ensure safe, adequate, and proper utility services at reasonable rates for customers.

The five member board functions almost like a court and each member serves for a six year staggered term. It is a paid position. With Chivukula’s exit, the community lost a very dear friend in the legislature.

“I am currently specializing in telecommunications issues as a Commissioner. I am also looking at economic development in the utilities space. I have regular hours and time with my family,” he said.

Chivukula, 64, a native of Andhra, came to the United States in 1974 and earned a master's degree in electrical engineering from City College of New York.

He and his wife, Dayci, have two children.

Chivukula has focused on energy issues in the Legislature. He lists the Regional Greenhouse Gas Initiative and Global Warming Response Act as legislative accomplishments.

Chivukula was one of the architects of the state's energy master plan; has worked to develop renewable energy; and sponsored a number of energy efficiency and conservation measures. He worked at the local and state levels to promote open-space preservation.

He also worked to promote competition in the cable market and develop small business and technology incubators.

Four years ago, when he celebrated his 60th birthday, he said he had only one regret. “Only regret I have is that I am away from my parents whom I could serve in their old age. But, I don’t know what might have happened if I would have remained in India but not close to where my parents lived,” he said then.

He was not sure if he remained in India, if he would have been in politics. “I would have succeeded in some business venture. But, I don’t know whether I would have entered politics in India.”

“It is hard to turn the clock back to think what might it have been. I would have been a proud Indian Citizen serving the people of India, the country who provided me wonderful parents and great education.”

But US gave fantastic opportunities and privileges. “I have been humbled by the support and recognition that I received in my life. I am grateful for the support I have received from my family and friends.”

He noted that he always wanted to help others and politics was one way for that. “I have always been looking to be helpful to others. I was inspired by Swami Vivekananda’s speech I used in my elocution competition at the Hindu Theological High School, Chennai, namely to paraphrase it from memory, ‘You cannot help anyone. But, you can only serve. Serve the children of the Lord.’

“Throughout my engineering and political career, I had many opportunities to help others. I distinctly remember what one of family friends, late Gopalbhai Desai said when I asked him how I might be able to repay him for all of the help he provided for me, ‘Find others like yourself who need help and help them. That will be the best repayment.’

Though an engineer, he said he was not averse to politics and entering it was not something that happened accidentally. “My goal was to engage the South Asian American population in electoral politics. That’s why I started the grassroots politics to reach out to the community to register them for voting and voter outreach campaigns to increase their participation.

“During that process, I participated in various election campaigns volunteering my time at the local. Eventually, my approach opened doors for me to head the Democratic Party in Franklin Township (Somerset County) in 1993 and lead it to victory in 1995. I got an opportunity to successfully run for Franklin Township Council in 1997, subsequently becoming a mayor in 2000.”

"Service of our fellow human being is the highest calling and those of us who are in public office enjoy the rare privilege of being able to fulfill that mission," Chivukula said.

Legislatively, Chivukula’s most significant contributions are in the field of energy and fighting climate change.

These include sponsoring the Regional Greenhouse Gas Initiative, an innovative multi-state cap-and-trade program to reduce greenhouse gas emissions. He also has sponsored several measures for the development of renewable sources such as solar and wind by business and industry and which provide tax breaks to consumers to switch to alternative energy.

Due to his efforts, the assembly sessions were opened with Hindu and Sikh prayers.

He advanced a proclamation declaring January 26 as India Day in New Jersey and a resolution recognizing the Indian festival of Diwali in the state.

A long-time resident of Franklin, Chivukula was born in Nellore, Andhra. He worked for CBS Television during 1977-78. From 1978 to 1980, he worked for Electronic Associates designing power-plant operator training simulators.

He developed control diagram language for sewerage treatment plants for Leeds and Northrop from 1980 to 1981. He served as senior management consultant and systems engineer with AT&T Bell Labs from 1981 to 1983.

In 1983, he moved to AT&T Technologies where he developed the Bell Communications Research account and was responsible for marketing computers ranging from minis to super micros. He worked as an account executive for AT&T Information Systems from 1985 to 1987, and became senior product planner for AT&T Microelectronics in 1988. He also developed quality improvement methodology and business process management techniques during his assignment with the AT&T from 1990 to 1998.

Notwithstanding his extensive work experience in the broadcast and telecom industries, his believes his highest calling is in public service.

Photo:
Chivukula took the oath as a commissioner on a Bhagavad Gita held by his wife Dayci, last year 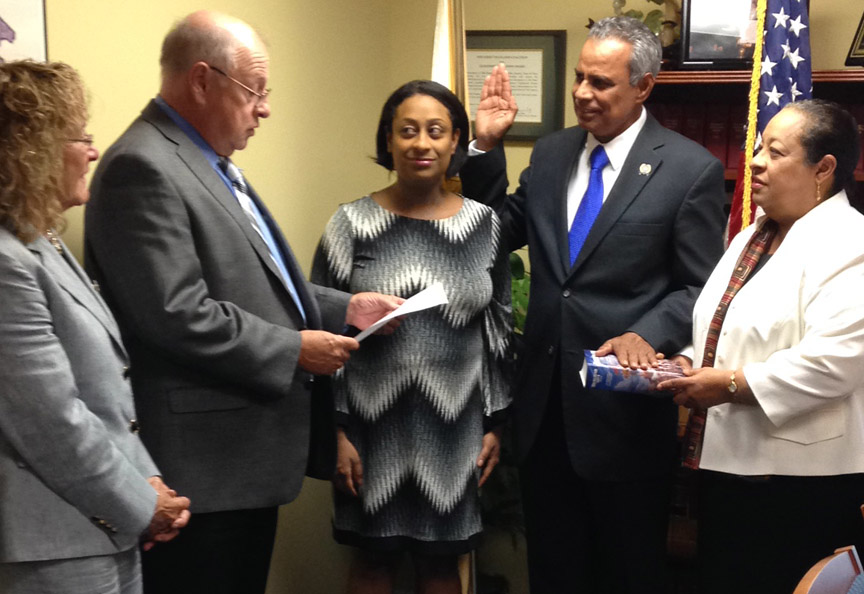