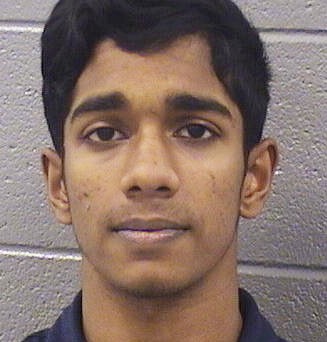 Freshman Mohammad Hossain, 19, appeared shocked after a Cook County judge set his bail at $500,000, walking back to the lockup with his mouth wide open.

The judge was taken aback after Hossain's lawyer, assistant Cook County public defender Sandra Bennewitz, said Hossain had been involved with several UIC leadership programs, was a student ambassador to the alumni association and was on the triathlon team

"Sandra, how can someone involved in all that let a movie persuade him to do something like this?" asked Judge Adam Bourgeois Jr.

"He would say that it was consensual," she replied.

Prosecutors said Hossain and the woman went to Hossain's dorm room about 5:30 p.m. Saturday. The two had "previously been intimate" but were not dating, said Assistant State's Attorney Sarah Karr.

Once inside his dorm, in the 900 block of West Harrison Street, Hossain allegedly asked the woman to remove her clothing and she did, keeping on her bra and underwear, Karr said. He then bound her hands above her head and to a bed with a belt, used another belt to bind her legs and stuffed a necktie into her mouth, Karr said.

Hossain used a knit cap to cover the woman's eyes, Karr said, and removed the woman's bra and underwear. He then began striking the woman with a belt. After hitting her several times, the woman told Hossain he was hurting her, told him to stop "and began shaking her head and crying," said Karr.